You are here: Archives » Fall 2006 » The Mother Church of Methodism in Lynchburg » Take a Tour of Churches » Site of first Third St. Methodist Meeting House

8. Site of the first Third Street Methodist Meeting House (a brick building 36’ x 46’, two stories with a gallery) at 1011 Church St. which was hastily built in 1806. The building was plagued with cracks in the walls and poor construction and never quite completed. The Trustees decided in June 1814 it was a disaster and they would build a new one. It was completed in 1815. The first church bell in Lynchburg, given to the church by the “Ladys of Lynchburg” rang in 1815. The durability of this building enabled it to be used by a number of tenants for 150 years until 1963, when it was demolished. After Old Centenary was built across Church St. in 1849, the 1815 structure was used as a temperance hall, a theater, a civil War barracks, apartments and an art center. Picture obtained from Artist sketch (by Hadly) which appeared in Asbury Christian’s book: Lynchburg and Its People. 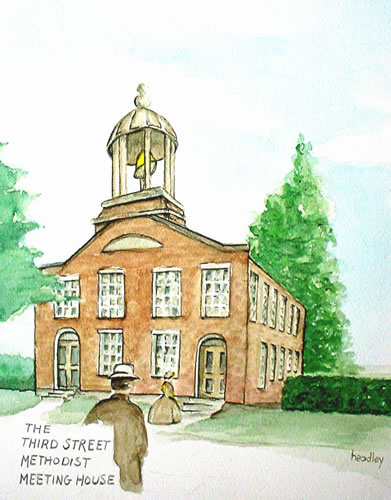 Next page: Site of Old Centenary