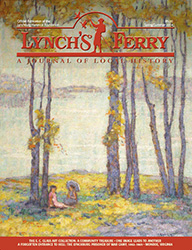 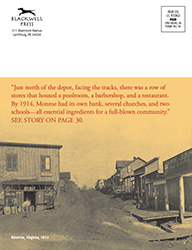 E. C. Glass High School currently houses a museum-quality art collection consisting of approximately 200 original pieces dating back to 1895, spanning the twentieth century, and continuing into the twenty-first. The collection features selected works by E. C. Glass students—many of whom have become well-known artists—and by teachers of art, including the faculties of E. C. Glass, Randolph-Macon Woman’s College, and Lynchburg College. Many beloved community artists are represented as well. This article offers some insight into how the collection was started and serves as a tribute to faculty and alumni who have maintained it for 119 years.

One Image Leads to Another

by Nancy Blackwell Marion.
The News & Advance’s “Mystery Picture of the Week” columnist takes readers on a supersleuthing adventure from Marianne Rhodes’ kitchen to Bernhard Gutmann’s studio on a case that ties into the E. C. Glass art collection

A Forgotten Entrance to Hell: The Lynchburg Prisoner of War Camp, 1862-1865
by Clifton W. Potter.
“Perhaps one of the best kept secrets among local historians,” writes the author, “is the fact that from April 1862 until April 1865, Lynchburg was the site of a large prisoner of war camp.” Established at the fairgrounds, the camp was intended to hold about 500 men, an estimate that would soon seem tragically naive. “The first serious crisis came in early June 1862. General Thomas “Stonewall” Jackson’s brilliant campaign in the Shenandoah Valley against a vastly larger force had netted close to 3,000 Union prisoners whom he sent to Lynchburg, and the camp at the fairgrounds immediately was overwhelmed.”

Monroe, Virginia: One Hundred Years on the Old Southern Railway
by Thomas G. Ledford.
For nearly 100 years the village of Monroe was a “busy, smoky, noisy place where trains arrived and departed every hour on the old Southern Railway.” Almost everyone had a connection to the railroad: “they worked for the Southern or sold goods to those who did, or they had relatives helping to move trains from Washington southward to Danville and on to Spencer in North Carolina. The railroad set the tone of the community, and time was kept to the tune of blowing whistles...”