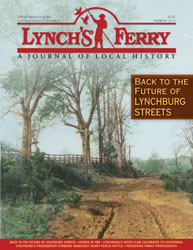 Back to the Future of Lynchburg Streets: A History of the
Pavement of the Streets of Lynchburg, Virginia
by Andy Sale.
In the 1990s, “as Lynchburg’s revitalization efforts progressed,” residents of the city’s historic neighborhoods took to the streets. “In every district, peeking through fifty years of asphalt and macadam, were the original cobblestone, granite block, rubble, and vitrified brick.”

Horses at VMI
by Brian Bowen.
Before he entered the Virginia Military Institute, Bowen’s knowledge of horseback riding consisted of watching Tom Mix westerns. Despite some moments of “great trepidation,” the real thing topped anything Hollywood had to offer. VMI’s Garrison Review “was a pageant of color and power never to be forgotten.”

Lynchburg’s Preservation Steward: Margaret Henry Penick Nuttle
by Margaret Barksdale Nuttle Melcher, with an introduction by Peter W. Houck.
“The check Mrs. Nuttle received might have floated a small country.” Instead, she used her inheritance to further her late father’s charitable interests and to “show her appreciation for the city that so often served as her home away from home.”

Lynchburg’s Sphex Club Celebrates Its Centennial
by James M. Elson.
The what club? How do you spell it? Obviously, the author doesn’t need to come up with a clever or misleading title in this case.

P reserving Family Photographs
by Gregory R. Krueger.
Uh oh. This lively, informative article from the curator of the Lynchburg Museum System is a wake-up call. “Be aware,” warns Krueger, “that your photo albums might be destroying your photographs.”