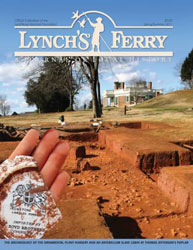 “Culture of the Earth”: The Archaeology of the Ornamental Plant Nursery and an Antebellum Slave Cabin at Thomas Jefferson’s Poplar Forest
by Jack Gary, Eric Proebsting, and Lori Lee.
Imagine this: A brilliant man develops breakthrough techniques for exploring the past which future scientists refine and then use to sift through his life, inch by painstaking inch, centuries after his death. Is it an old episode of the Twilight Zone? A new M. Night Shyamalan film starring Bruce Willis? Nope. It’s just another day at Poplar Forest in Bedford County, Virginia.

Central Virginia’s Southern Soldiers: A Photographic Essay
by Gregory H. Starbuck.
In the early days of the Civil War, local Confederate soldiers readied themselves for battle, gathering their weapons, altering their civilian clothes to serve as uniforms, and having their photographs taken. The executive director of the Historic Sandusky Foundation has assembled a collection of these rare portraits—images of serious-looking young men, posing for the camera, prepared to meet their fate.

Lynchburg Glass Corporation
by Justin Stoudt.
In the early 1900s, the Lynchburg Glass Works appeared poised to enter the pantheon of well-known Central Virginia manufacturers. The plant had everything going for it—an ideal location, leading-edge equipment, and a client list that included Coca Cola. Its products “have been found in such faraway places as Newfoundland, Canada, South America, the Caribbean islands, Mexico, the Philippines, and Australia.” Yet locally, all traces of the company have essentially vanished.


^ Top
Previous page: Fall 2010
Next page: “Culture of the Earth” The Archaeology of the Ornamental Plant Nursery and an Antebellum Slave Cabin at Thomas Jefferson’s Poplar Forest
Site Map