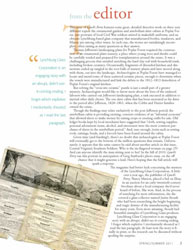 This issue of Lynch’s Ferry features some great, detailed detective work on three very different topics: the ornamental gardens and antebellum slave cabins at Poplar Forest, rare portraits of local Civil War soldiers attired in makeshift uniforms, and an obscure Lynchburg-based glass company that manufactured bottles, insulators, and  Mason jars among other wares. In each case, the stories are tantalizingly incomplete, often raising as many questions as they answer.
Thomas Jefferson’s landscaping plans for Poplar Forest required the construction of an ornamental plant nursery, a place where young trees and shrubs could be carefully tended and prepared for transplantation around the estate. It was a challenging process that entailed enriching the hard clay soil with household trash, including broken ceramics. Occasionally, fragments of discarded kitchen and dinnerware ended up tangled in the root balls of nursery plants and later moved along with them, out into the landscape. Archaeologists at Poplar Forest have managed to locate and mend some of these scattered ceramic pieces, enough to determine when the vessels were manufactured and link the debris to the 1812–1813 demolition of Poplar Forest’s original kitchen.
But solving the “cross-site ceramic” puzzle is just a small part of a greater mystery. Archaeologists would like to know more about the lives of the enslaved laborers who carried out Jefferson’s landscaping plan, a task executed in addition to myriad other daily chores. The one slave cabin that has been excavated so far dates to the period after Jefferson, 1828–1861, when the Cobbs and Hutter families owned the estate.