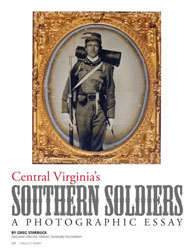 When war erupted in 1861, Central Virginia answered the call. Thousands of men, young and old, enlisted for Virginia’s defense. Most were ignorant of war and faced a steep learning curve.
These Central Virginia soldiers took the time to have their photographs permanently etched on glass or tin. A feature unique to each soldier was his uniform. Early in the war uniforms were not standardized, even the colors each side wore were not agreed upon. Many uniforms were adapted from everyday clothing or copied from French designs.
The heavy overshirts seen in many of these photos are a military variant of a common workshirt. These shirts were also used by firemen, policemen, prospectors, and loggers. For military use, they were made in various colors; in this case gray and blue. They were discarded in the early months of the war for sturdier, government-issue Confederate uniforms.
These soldiers represent Bedford, Amherst, Appomattox, and Campbell counties, as well as Lynchburg. The primary regiments Lynchburg contributed to the war effort were the 11th Virginia Infantry and the 2nd Virginia Cavalry. Outlying regions contributed the 14th, 19th, 21st, and 24th Virginia Infantry Regiments.