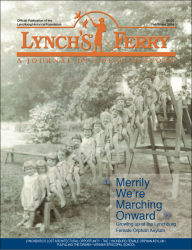 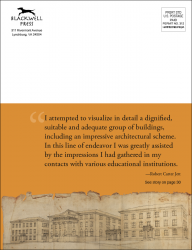 Lynchburg’s Lost Architectural Opportunity
by S. Allen Chambers.
In the spring of 2001, architectural historian S. Allen Chambers took Lynch’s Ferry readers on a fascinating tour of “The Lynchburg That Never Was,” exploring an assortment of commercial and residential projects that remained on the drawing board. In this issue, using illustrations on file at the Metropolitan Museum of Art in New York, the author examines the “lost” Miller Home orphanage—specifically, the structure envisioned by influential architect A. J. Davis— and compares it with the actual “stark, blocky mass” designed by John Ellicott and completed in 1874. One hundred years later, Ellicott’s building was demolished to make way for The Plaza.

Growing Up at the Lynchburg Female Orphan Asylum
by Iva Campbell Burford.
“We weren’t ashamed of being in the orphanage, not at all,” Burford wrote. “To tell the truth, we felt a little superior to people outside...” In this excerpt from her memoir Now the Song, the author succeeds in challenging stereotypes fashioned from classic novels and films. “The idea,” she once explained, “was first born when I was in school and we read Jane Eyre. I wanted to stand up in the classroom and tell them that orphanages weren’t like the book depicted...” What began as a refutation of sorts has now become a precious contribution to the ever-widening scope of Lynchburg’s social history.

Fulfilling the Dream
by Mary M. Abrams.
In his “Brief History of The Virginia Episcopal School,” founder Robert Carter Jett went out of his way to humbly acknowledge that he did not go it alone. The institution he considered to be his greatest achievement required innumerable contributions—large and small—from other people, a great many of whom hailed from the Hill City. From St. Paul’s Church to the Chamber of Commerce, Jett’s vision prompted an outpouring of support which, in turn, compelled the founder to meet expectations. As he described it: “The favorable attitude of the Lynchburg people...challenged anew my thinking and my sense of responsibility...”

^ Top
Previous page: On the Precipice: Lynchburg at the Dawn of the Great Depression
Next page: Lynchburgâ€™s Lost Opportunity
Site Map