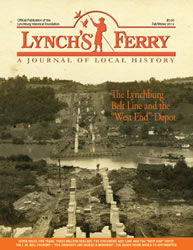 Seven Miles, Five Years, Three Million Dollars: The Lynchburg Belt Line and the "West End" Depot
by Garland Harper.
This fall marks the 100th anniversary of the Kemper Street Station. Located in what was once known as Lynchburg’s up-and-coming “West End,” the depot was the last stop on the Southern Railway’s controversial journey around the city. Plans for the railway improvement project, which also required the construction of numerous trestles and tunnels, conjured fearful “Visions of dozens of shrieking, hissing, rumbling trains...and gangs of vicious tramps following the great highway between North and South.”

by John Mitchell Bell in collaboration with Robin Bell Jewett and Pete Jewett.
Campbell Avenue in Lynchburg intersects with Mitchell Bell Road in Madison Heights, not on Google maps, but in hearts and memories of “Pop” Bell’s grandchildren. The J. M. Bell Foundry began as a true mom-and-pop shop and then gradually expanded into a flourishing family-owned business. Photographs and anecdotes revive an era when customer support entailed donating a keg of nails.

“The Sweeneys are indeed a wonder!!”: The banjo from Africa to Appomattox
by David D. Wooldridge.
This entertaining and informative essay explores the life, legend, and legacy of Joel Sweeney, the Elvis of the nineteenth century. Wooldridge has pulled together an eye-popping assortment of photos and mementos documenting the musical influences and experiences of Central Virginia’s “genius of the banjo.” He has also posted samples of Sweeney-era music at LynchsFerry.com. Listen to the “half barbaric twang” that inspired “hordes of banjo beginners.”