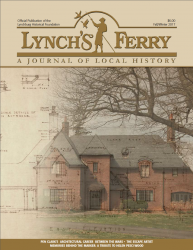 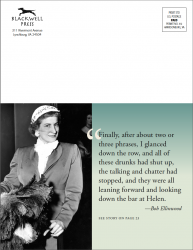 Pen Clark’s Architectural Career Between the Wars
by S. Allen Chambers Jr
Pendleton Scott Clark (1895–1975) enjoyed a long, distinguished career as one of the city’s “most accomplished twentieth-century architects.” Indeed, his drawings and manuscripts “form an integral component of the Lynchburg Architectural Archive” where they have remained carefully preserved for forty-two years. In this issue, architectural historian Al Chambers flings open the storage boxes and file drawers and brings Pen Clark back to life as a talented young man in the most promising and energetic phase of his professional life, the period between World War I and World War II.

by Robert “Robin” C. Wood III
About the same time the Fall/Winter 2017 Lynch’s Ferry arrives in mailboxes and newsstands across Central Virginia and beyond, a Virginia historic highway marker will be placed near what was once the Fort Hill home of Helen Pesci Wood, her husband R. C. Wood, and their son Robert “Robin” C. Wood III. While the marker does an impressive job of summarizing Helen Wood’s musical talent and contributions to the arts in the Commonwealth, the author successfully takes on the task of describing the attributes that made her an outstanding and inspirational mother, teacher, singer, director, and producer—all during an era when career women were considered exceptions to the rule.

The Escape Artist
by Michael Hudson
Written more to entertain old friends and impress young ladies than to reveal the ugly truths of soldiering, Second Lieutentant William D. Woodson’s War Recollections—a record of his injuries, escapes, and close shaves during the “hostile invasion by Mr. Lincoln’s armies”—is put into context by Michael Hudson, executive director of the Avoca Museum in Altavista. Woodson’s twenty-eight-page booklet, one of only four known to exist, originally appeared as a series of letters published in the Fincastle Herald forty-seven years after the end of the Civil War.