You are here: Archives » Fall 2017 » Memories Behind the Marker: A Tribute to Helen Pesci Wood 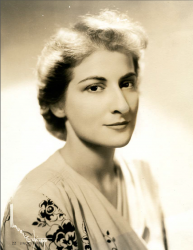 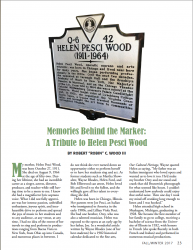 My mother, Helen Pesci Wood, was born October 27, 1911. She died on August 9, 1964 at the age of fifty-two. During her lifetime, she had an incredible career as a singer, actress, director, producer, and teacher while still having time to be a mom to me. I knew she had a magnificent lyric soprano voice. What I did not fully appreciate was her intense passion, unbridled enthusiasm, joyous spirit, and inexhaustible drive to perform and spread the joys of music to her students and to any audience, at any venue, at any time. I had no idea of the extent of her travels to sing and perform in productions ranging from Buena Vista to New York, from Ohio up into Canada, and numerous places in between. I do not think she ever turned down an opportunity either to perform herself or to have her students sing and act. As former students such as Martha Showalter, Wayne Rhodes, Helen Ford, and Bob Ellinwood can attest, Helen loved life and lived it to the fullest, and she willingly gave all her talent to everything she did.
Helen was born in Chicago, Illinois. Her parents were Joe Pesci, an Italian who immigrated to America in the early 1900s, and Lillian Viola Pesci. She had one brother, Orey, who was also a talented musician. Helen was exposed to the opera at an early age by her father, Joe. In a wonderful article written by Wayne Rhodes (one of her best students) for a 1982 historical calendar dedicated to the fine arts, Our Cultural Heritage, Wayne quoted Helen as saying, “My father was an Italian immigrant who loved opera and wanted us to love it too. He’d make my brother Orey and me stand and crank that old Brunswick phonograph for what seemed like hours. I couldn’t understand how anybody could enjoy that awful noise. Then one day I took my mind off cranking long enough to listen and I was hooked.”
Helen attended high school in Muskegon, Michigan, graduating in 1928. She became the first member of her family to go to college, receiving a bachelor of science from the University of Illinois in 1932, with honors in French (she spoke fluently in both French and Italian) and performed in numerous musical productions.
Joe Pesci’s craft was varnishing wood, and sometime in the early 1930s, he took a position at the Lane Cedar Chest Company in Altavista, Virginia. Helen followed her parents to Lynchburg.
Her first job was advertising manager at Millner’s department store. Helen lived in the Fort Hill area, the same section of town where a confirmed bachelor named R. C. Wood lived with his mother at the corner of Fort Avenue and Norvell Street. Somehow the two were introduced, and became friendly enough to where my future mother would be comfortable commuting in a car with my future father to their respective downtown workplaces. The story goes like this: Helen waited each morning at a bus stop to ride to Millner’s on Main Street. One morning, R. C. spotted Helen waiting for the bus, offered her a ride, and life was never the same. R. C.’s office was in the People’s Bank Building. My understanding is that R. C. was also dating another young lady. So, after he drove Helen to Millner’s, he then retraced his route and picked up his other girlfriend and drove her to work. I don’t know how long this lasted, but Helen and R. C. were married on September 7, 1937, in Altavista, Virginia, at the home of Grady and Sally Lofton, two lifelong friends of my parents. R. C. was twelve years senior to Helen.
The first record I have of Helen’s interest in pursuing a career as a singer is a note dated October 20, 1939, congratulating her on her performance. The note states “I have never enjoyed any performance as much, have seen it twice and would see it again.” I do not know who wrote Helen, but obviously Helen was very serious in pursuit of a career in music after her marriage to R. C.
I was born on July 4, 1940. Soon after my birth, my mother decided to pursue voice lessons with noted voice teachers and coaches in New York. In a letter dated November 29, 1940, Giuseppe Boghetti, a noted New York voice teacher, agreed to “break all precedent” and see Helen as per her request, “twice a month.” Her first lesson was February 7, 1941. Boghetti already had an outstanding reputation as an opera coach; he taught Marion Anderson and Helen Traubel, who were recognized Metropolitan Opera stars. Over the next seven or so years, Helen traveled to New York on a regular basis to study with Boghetti and other famous opera coaches, including Enrico Rosati, as well as Metropolitan Opera conductor Cesare Sodero and stage director Desire Defrere. Sodero wrote Helen in August 1943 “I like your folder and am delighted to be known as your coach.” Her local coach was Harrison Christian. Many Lynchburgers remember Harrison as a fine baritone with a nationwide reputation. He died in a fire in the late 1940s.
When Helen began her studies in New York, I was approximately six months old. Now I wonder who might have been changing my diapers. I know it wasn’t R. C. Wood. Helen and R. C. did have full-time help.
One of my earlier remembrances of Helen’s pursuit of her career as a teacher and musician were her travels to Southern Seminary in Buena Vista, Virginia. I would ride with R. C. to the train station, and I remember her climbing aboard a train called the Dinky, which was a commuter train from Lynchburg to Buena Vista, I believe on the former C&O tracks.