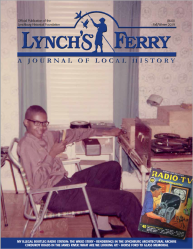 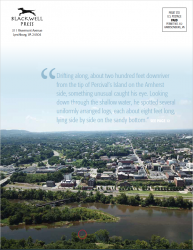 My Illegal Bootleg Radio Station: The WKKD Story
by Robert “Mad Lad” Goins
“Other radio stations had tall towers to broadcast from,” writes the author. “I had a long wire running from my bedroom window up to the roof and then out to a tall tree in the yard. But, just like the big stations, there was a red light blinking at the top of my ‘tower,’ though mine was a Christmas bulb.” In this charming, alarming, and informative article, retired disc jockey Robert “Mad Lad” Goins captures both the spirit of youth and the struggles of Lynchburg’s African American community in the years 1966–1968.

Corduroy Roads in the James River: What Are We Looking At?

Roadways consisting of split or round logs have a ridged look that resembles corduroy. Often constructed in muddy or low-water areas, they can be used “as is” or refined to ensure safer, smoother crossings. The recent discovery of corduroy roads in the James River should perhaps come as no surprise—after all, folks continued to ford the river even when ferries and bridges were available. Still, questions remain as to who, when, where, and how.

This lively, humorous article—discovered during Nancy Marion’s research for “Corduroy Roads in the James River” (above)—first appeared in the Autumn 1954 issue of Virginia Cavalcade. Romantic notions regarding the era of Lynchburg’s ferries and covered bridges are quickly dispelled as the author documents the rough-and-tumble side of the river-crossing business.
Renderings in the Lynchburg Architectural Archive
by Carolyn Gills Frazier

What are “scalies”? You’ll find the answer to this question and more in Carolyn Frazier’s wonderful introduction to the many remarkable architectural illustrations carefully tucked away in Jones Memorial Library. Better yet, this combined tour and tutorial may help readers identify similar drawings hidden away in storage closets and attics throughout Central Virginia.