You are here: Archives » Fall 2019 » Horse Ford to Glass Memorial: The Lynches Establish and Hold a Crossing on the Fluvanna River

Horse Ford to Glass Memorial: The Lynches Establish and Hold a Crossing on the Fluvanna River 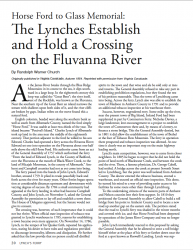 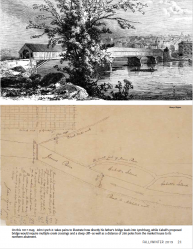 As the James River breaks through the Blue Ridge Mountains in its course to the sea, it dips southward in a large loop. In the eighteenth century this loop was called the “Great Bent”; the river itself, west of the Rockfish, was known as the Fluvanna. Near the southern tip of the Great Bent an island narrows the stream with shallows upon both sides of it, and the river cliffs are broken by gaps. Indian tribes on the move found this a natural ford.
English colonists, headed west along the southern bank as well as south from Albemarle County, named the ford simply “Horse Ford.” It was usable at least two-thirds of the year. The island became “Percival’s Island.” Charles Lynch of  Albemarle took up land in the area near the middle of the eighteenth century. That portion adjacent to the ford he willed to his son Edward. Charles had operated a ferry across the Rivanna River; Edward set one into operation on the Fluvanna about one-half mile above the old Horse Ford. His authority came from an act of the General Assembly of 1757 which authorized the ferry “From the land of Edward Lynch, in the County of Bedford, over the Fluvanna at the mouth of Black-Water Creek, to the land of Micajah Moorman, in the county of Albemarle.” Amherst and Campbell counties had not as yet come into being.
The ferry passed into the hands of John Lynch, Edward’s brother, around 1759. It plied its trade peacefully back and forth across the river for many years. Other ferries began operation at considerable distances upstream and downstream with varying degrees of success. By 1784 a small community had appeared at the ferry landing in what had become Campbell County, and John Lynch, on November 5, asked the General Assembly for permission to lay off and establish a town there. The House of Delegates approved, but the Senate would not give its consent.
The crossing was, however, of such importance that it could not but thrive. When official state inspection of tobacco was granted to Lynch’s warehouse in 1785, reasons for establishing a town became even more apparent. On November 14, 1786, Lynch, in the temper of his Quaker faith, repeated his application, stating his desire to have rules and regulations provided to discourage immorality, idleness and dissipation. He further asked that the law provide that no person could sell distilled spirits in the town and that wine and ale be sold only at inns and taverns. The General Assembly refused to take any part in establishing prohibition regulations, but they found the rest of his petition reasonable. Thus the town of Lynchburg came into being. Across the ferry, Lynch also was able to establish the town of Madison in Amherst County in 1791 and to provide an additional tobacco inspection at his warehouse there.

^ Top
Previous page: Corduroy Roads in the James River: What Are We Looking At?
Next page: Renderings in the Lynchburg Architectural Archive
Site Map