You are here: Archives » Fall 2019 » My Illegal Bootleg Radio Station: The WKKD Story 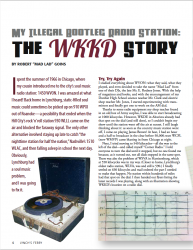 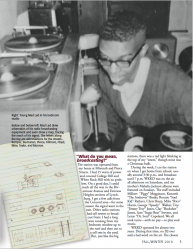 I spent the summer of 1966 in Chicago, where my cousin introduced me to the city’s soul music radio station: 1450 WVON. I was amazed at what I heard! Back home in Lynchburg, static-filled soul music could sometimes be picked up on 910 WPXI out of Roanoke—a possibility that ended when the Hill City’s rock ‘n’ roll station 930 WLLL came on the air and blocked the faraway signal. The only other alternative involved staying up late to catch “the nighttime station for half the nation,” Nashville’s 1510 WLAC, and then falling asleep in school the next day. Obviously, Lynchburg had a soul music problem, and I was going to fix it.
I studied everything about WVON: what they said, what they played, and even decided to take the name “Mad Lad” from one of their DJs, the late Mr. E. Rodney Jones. With the help of magazines and books, and with the encouragement of my Dunbar High School science teacher Mr. Clark and electric shop teacher Mr. Jones, I started experimenting with transmitters and finally got one to work on the AM dial.

Thanks to some radio equipment my shop teacher found in an old box of Army surplus, I was able to start broadcasting at 1000 kilocycles. However, WKDE in Altavista already had that spot on the dial (and still does), so I couldn’t begin my show until the station went off the air at sunset. I still laugh thinking about it: as soon as the country music station went off, I came on playing James Brown! At best, I had an hour and a half to broadcast in the clear before 50,000-watt WCFL (now WMVP) came blasting in from Chicago at night.
Next, I tried moving to 540 kilocycles—all the way to the left of the dial—and called myself “Corner Radio.” I told everyone to turn the dial until it stopped, but no one found me because, as it turned out, not all dials stopped in the same spot. There was also the problem of WSVA in Harrisonburg, which at 550 kilocycles was in my way. (Closer to home, Lynchburg’s oldest radio station, WLVA, was and still is 590.) I finally settled on 630 kilocycles and mail ordered the part I needed to make that happen. No station within hundreds of miles had that spot on the dial. I then handed out flyers listing the latest records I was playing, along with an illustration showing WKKD’s location on a radio dial.

^ Top
Previous page: Fall 2019
Next page: Corduroy Roads in the James River: What Are We Looking At?
Site Map