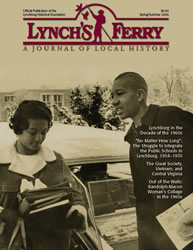 Lynchburg in the Decade of the 1960s
by Thomas G. Ledford
The recently retired director of Lynchburg’s museum system takes us back to the boom years of the 1960s “when the Hill City of the Old South and Tobacco Town faded away....”

No Matter How Long: The Struggle to Integrate the Public Schools in Lynchburg, 1954–1970 Chapter III
by Henry Faulkner Heil
The author’s careful analysis, combined with compelling oral histories gathered by the Center for the History and Culture of Central Virginia, transforms a seemingly black and white issue into a complex human drama.

The Great Society, Vietnam, and Central Virginia
by Michael W. Santos
They were young. They attended local high schools and enrolled in nearby universities. They worked at places like the Lane Company and Burley’s Market. Some volunteered to go to Vietnam, others were drafted. Their experiences continue to touch the lives of Central Virginians and the rest of nation.

Out of the Walls: Randolph-Macon Woman’s College in the 1960s
by Carolyn Wilkerson Bell
The 1960 sit-in which Bell reports “shocked and
distressed the campus and the community” was only the beginning. R-MWC was in the process of changing from a sleepy southern girl’s school into an active, innovative woman’s college.

From the Jones
History in Brief
A Book of Interest


^ Top
Previous page: Archives
Next page: Lynchburg in the Decade of the 1960s
Site Map