Out of the Walls: Randolph-Macon Woman's College in the 1960s 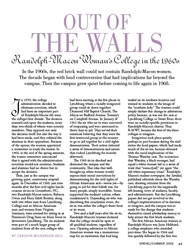 In the 1960s, the red brick wall could not contain Randolph-Macon women. The decade began with loud controversies that had implications far beyond the campus. Then the campus grew quiet before coming to life again in 1968.

In 1959, the college administration decided to eliminate sororities, which had been an important part of Randolph-Macon life since the college’s first decade. The decision stunned and upset the students, more than two-thirds of whom were sorority members. They opposed not only the decision itself, but also the way it had been made, and they enlisted the alumnae in their opposition. Because of the uproar, the trustees appointed a committee to study the matter. In 1960, at the end of the spring semester, the trustee committee announced that it agreed with the administration: sororities would not continue. Students and alumnae had no choice but to accept the decision.

About the writer: Carolyn Wilkerson Bell is Susan Duval Adams Professor of English at Randolph-Macon Woman’s College, where she has taught for thirty-five years. She is an alumna of R-MWC and holds an M.A. from the University of Pennsylvania and a Ph.D. from the University of Texas at Austin. Currently she is working on a history of R-MWC from 1950 to 1993.