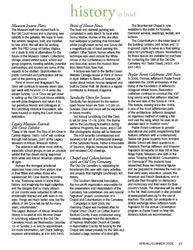 Museum System Plans
The Museum staff has moved back to the Old Court House and is planning new exhibits in the galleries. We hope to have the exhibits designed, built, and installed by late 2006. We will also be working with The PRD Group of Fairfax, Virginia, on a study to look at alternatives for the future of the Museum System. Collections storage, added exhibit space, school and group programs, traveling exhibits, potential partnerships, and tourism are some of the aspects to be studied. Opportunities for public comment and participation will be part of the planning process.
Point of Honor and Bragassas’s Toy Store will continue to operate seven days per week with hours of 10–4 every day except Sunday, 12–4. Once we get closer to setting up the Old Court House exhibits, we will close Bragassa’s and return it to our generous friends and colleagues at the Lynchburg Historical Foundation, who have housed us during the Court House restoration.
^ Top

Legacy Museum Extends Jim Crow Exhibit
“Deep in My Heart: The Rise of Jim Crow in Central Virginia, 1865–1954” will continue through mid-January, 2007 at the Legacy Museum of African American History.

The extension will allow more visitors, especially school groups, to see an unusual exhibit that has drawn strong responses from white and African American visitors of all ages.

Perhaps the strongest emotional responses have come from visitors now in their fifties and sixties, those who experienced Jim Crow directly. According to one, “Everyone needs to know their history. Just imagining the legal indignities and the dangers that so many citizens of our country were subjected to left me emotionally drained and with tears in my eyes. Things are much better now, but the effects of Jim Crow will be felt for many years, unfortunately.”


The Legacy Museum of African American History is located at 403 Monroe Street in Lynchburg, adjacent to the Old City Cemetery. Hours are Wednesday–Saturday 12–4; Sunday 2–4, and by appointment. For more information, call Cheryl Stallings, museum administrator, at 434 845-3455.
^ Top

Point of Honor News
The foyer and stairwell painting was completed in early March by local artist Sonny Harlow. Homes of this era often had wallpaper or painting that mimicked ashlar (rough-hewn stone) and Sonny did a magnificent job of hand painting this pattern. Other historic homes where this technique was used include the White House of the Confederacy in Richmond and Boscobel, across the Hudson River from West Point, New York.

A lecture was held in the Bertha Green Webster Carriage House at Point of Honor in April. William N. Banks of Newnan, GA spoke about historic houses designed and built by Daniel Pratt. Mr. Banks is a regular contributor to Antiques magazine.
^ Top

Sandusky Open for Season
Sandusky has reopened for the season, open house hours are from 1–5 pm on Sundays. Days and hours will be expanded in future months.

3rd Annual Lynchburg Civil War Days is set for June 17–18, 2006. The theme will be the Lynchburg homefront during wartime. Programs, live music, and a Civil War photography display will be featured.

The HSF recently commissioned and received a full set of architectural drawings of the Sandusky house. Frazier & Associates of Staunton, Virginia measured the house and rendered CAD drawings.
^ Top

The Southern Memorial Association, the non-profit organization responsible for the preservation and interpretation of the Cemetery, has undertaken one very special “signature” project: construction of a Chapel and Columbarium in the Cemetery.

Completed in April 2006, the charming Chapel was modeled after Ivy Chapel Union Church on Coffee Road in Bedford County. It was constructed using materials salvaged from the demolition of Hermon Methodist Church at Oakville in Appomattox County. All funding for the Chapel was raised privately by the SMA and included a large number of in-kind gifts.

The Bicentennial Chapel is now available to the public for funerals, memorial services, weddings, recitals, and lectures.

The Columbarium in the lower level of the building contains 288 niches and 12 in-ground crypts to serve as a final resting place for Lynchburg’s citizens.

Poplar Forest Celebrates 200 Years
In 2006, Thomas Jefferson’s Poplar Forest celebrates the 200th anniversary of the laying of the foundation of Jefferson’s octagonal retreat house. Restoration craftsmen continue to construct the 100’ long service wing that Jefferson attached to the east side of the house in 1814. This feature, missing since the 1840s, is one of the most Jeffersonian parts of the architecture. Jefferson designed an ingenious method of making a flat roof over the wing, which he used as an elevated deck or “outdoor room.”

Poplar Forest continues to provide educational and public programming that features Jefferson with a contemporary. Twelve 6th grade students from Amherst Middle School will direct questions to President Thomas Jefferson and Emperor Napoleon Bonaparte on May 5th at Blue Ridge Public Television—the sixth in the series “Shaping the World: Conversations on Democracy.” The students have researched these two historical figures and are prepared to interview the men on their early years, education, careers, the American and French Revolutions, and in particular their thoughts on democracy and monocracy and their vision for their country’s future. The interview will be aired in the fall. Web-curriculum is also provided at www.poplarforest.org for the use of teachers. The public can participate in a similar exchange when Jefferson hosts Napoleon for the annual Conversation program at Poplar Forest on May 6th. Advance tickets are recommended.