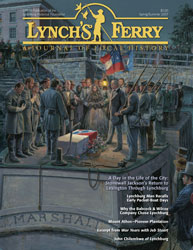 A Day in the Life of the City: Stonewall Jackson’s Return to Lexington Through Lynchburg
by Robert Wimer
The author, a former reporter and longtime editor with Lynchburg’s News & Daily Advance, delivers “breaking news,” as well as coverage of a city contending with sickness, scarcity, drunkenness, and rebellion.

Why the Babcock & Wilcox Company Chose Lynchburg: Saga of the Search for a Nuclear Power Research, Engineering, and Manufacturing Site
by John W. Landis
A B&W search team, inundated with proposals, was forced to narrow the competition to cities east of the Mississippi. Find out how Lynchburg ultimately paved its way to the top.

Excerpt from War Years with Jeb Stuart
by Lt. Colonel W. W. Blackford
This heartfelt and humorous story, “a bright spot in the life of war-worn, half-famished soldiers,” provides a memorable portrait of Judge Robertson and a glimpse of the Mount Athos plantation in its heyday.

John Chilembwe of Lynchburg
by Ann van de Graaf
Every year the citizens of Malawi celebrate John Chilembwe Day, in honor of the outspoken preacher and hero for independence who was trained at Lynchburg’s Virginia Seminary and College (now known as The Virginia University of Lynchburg).

From the Jones Library