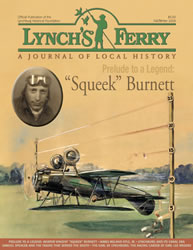 Buy The Canal on the James Here

Prelude to a Legend: Aviator Vincent “Squeek” Burnett
by David Fortuna
At the age of fourteen, Squeek Burnett was lying to his parents, playing hooky, “riding on a high cloud,” and free-falling into sacks of cash. In this exciting look back, the legendary aviator describes his two-meals-a-day transformation from a high school truant into a hometown hero.

Lynchburg and Its Canal Era
by T. Gibson Hobbs, Jr.
In 1840, at the moment the crew of the General Harrison was coming within earshot of Lynchburg’s cheering crowds, the canal era was nearing its peak. After 1854, packet- and freight-boat traffic began to dwindle, but the beautiful, well-built infrastructure that eased the journey endured. Canal engineers and stonemasons had done a superb job of laying the foundation for their competition: the railroads.

Samuel Spencer and the Trains That Served the South
by Rosemary Dunne
The dark side of Samuel Spencer’s shining creation came crashing into his luxurious quarters on Thanksgiving Day, 1906, killing eight and seriously injuring several others. Delays, mechanical problems, miscommunications, investigations, new regulations—the words used to explain the incident are familiar but the story still shocks.


The Earl of Lynchburg: The Racing Career of Earl Lee Brooks
by Ervin Brooks
Talk about pop icons—Earl Brooks’ portrait once appeared on Pepsi bottle caps, along with his name and car #28. He was on the set with Elvis, kissed by Patsy Cline, and portrayed by Beau Bridges. In this race through the star-studded highlights of his father’s life, the author breezes past the hard times: long drives, late nights, sore bones, and bad crashes.