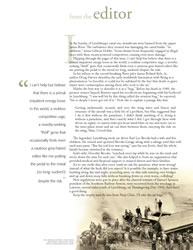 In the heyday of Lynchburg’s canal era, steamboats were banned from the upper James River. The turbulence they created was damaging the canal banks. “In addition,” writes Gibson Hobbs, “horse-drawn boats frequently engaged in illegal races with these steam-powered competitors, causing even more damage.”
Flipping through the pages of this issue, I can’t help but believe that there is a primal impatient energy loose in the world, a reckless competitive urge, a novelty-seeking “thrill” gene that occasionally finds even a cautious grey-haired editor like me putting the pedal to the metal (so long, suckers!) despite the risk.

In his tribute to the record-breaking Navy pilot James Roland Kyle, Jr., author Doug Harvey describes the early worldwide fascination with flying as a phenomenon “so forceful, it could not be subdued by the fact that death or grave injury were commonplace among those who took to the air.”