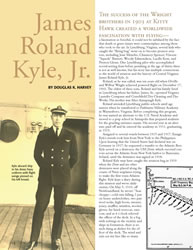 The success of the Wright brothers in 1903 at Kitty Hawk created a worldwide fascination with flying—a fascination so forceful, it could not be subdued by the fact that death or grave injury were commonplace among those who took to the air. In Lynchburg, Virginia, several kids who caught the “flying bug” went on to become pioneer aviators, including Jesse Menefee, Chauncey Spencer, Vincent “Squeek” Burnett, Woody Edmondson, Lucille Kent, and Preston Glenn. One Lynchburg pilot who accomplished record-setting feats before perishing at the age of thirty-three is not as well known, but his story has multiple connections to the world of aviation and the history of Central Virginia: James Roland Kyle, Jr.

Roland, as he was called, was ten years old when Orville and Wilbur Wright achieved powered flight on December 17, 1903. The oldest of three sons, Roland and his family lived in Lynchburg where his father, James, Sr., operated Virginia Laundry Company and Crutchfield Dry Cleaning and Dye Works. His mother was Alice Aunspaugh Kyle.

Doug Harvey is a native of Lynchburg and grew up on the family farm in Campbell County. He has a BS degree in history, English, and education from Radford University and taught at Dunbar Middle School from 1976-1981. He then earned a historic preservation degree from Mary Washington College and interned at the Smithsonian Institution. Doug is also a graduate of the UVA Executive Development Institute, the Winedale Museum Seminar at the University of Texas, and the Museum Management Symposium at the University of Colorado.

Since 1982, he has worked in leadership positions at The Manassas Museum System, Pamplin Historical Park, The Museum and White House of the Confederacy, and The American Civil War Center at Historic Tredegar. His Board service includes the Virginia Association of Museum’s Council, Prince William-Manassas Tourism Council, and Lee’s Retreat.

Harvey is married to the former Deborah Manning of Newport News and returned to Lynchburg in 2005 as director of the Lynchburg Museum System.
The author has a longtime interest in early aviation. Among the pilots noted in the first paragraph of this article, he grew up next door to Vincent “Squeek” Burnett. Recalling that experience, Harvey writes:

During the Great Depression, my grandfather James E. Burnette sold half of the family farm to Sam Burnett, Squeek’s father. By the time I came along, Squeek owned the farm and had retired from stunt flying and military service. I helped Squeek and his wife, Evelyn, with chores around the farm such as mowing, weeding gardens, and feeding the dogs when they traveled.

Squeek kept a disassembled plane in the barn that he always planned to restore but, except for some crop dusting and narration of air shows, his flying days were mostly behind him. He mainly steered an old red tractor at that point and many friends from his aviation career stopped by to tell stories.

My mother and her sisters recall that when they were younger, Squeek used to buzz them as they were out and about, and he would sometimes fly upside down under the power lines, and land in our field. He often invited me to go flying with him but I always declined given the “strong advice” of my elders.