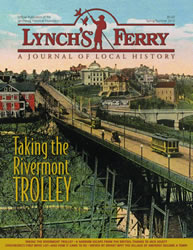 Taking the Rivermont Trolley
by Roger G. Garfield and Graham C. Garfield.
The electric Rivermont railway “specialized in recreational traffic,” whisking Lynchburgers to the roller rink in heated cars for only five cents. It sounds like a storybook fantasy come true—unless you’re stuck in an automobile, trying to make a left-hand turn across the tracks.

A Narrow Escape from the British, Thanks to Jack Jouett
by Gaye Wilson.
Even without the thorns, cuckoo clock, and other embellishments to the legend of Jack Jouett you heard as a child, the story is still riveting. Let’s hope for Jouett’s sake that Jefferson’s offering of a “glass of good Madeira” is not a myth.

Jefferson’s Flight
by Martha Terrell Burruss.
This excerpt, included as a companion piece to the Jack Jouett article above, traces Jefferson’s journey from Monticello to Poplar Forest after Tarleton’s Raid.

Lynchburg’s First Wine List—and how it came to be
by S. Allen Chambers Jr.
This series of historic events cries out to be reenacted. (What do you suppose Mary Pocahontas Cabell was wearing?) In the meantime, Poplar Forest’s Thomas Jefferson Wine Festival will have to do. Cheers!

Driven by Drink? Why the village of Amherst became a town
by Robert Wimer.
If you were expecting a series of quaint, cheery anecdotes celebrating the Town of Amherst’s 100th Anniversary, fugetaboutit. The road to incorporation “was filled with bumps,” and the author, a retired newspaperman, is not afraid to go over them.