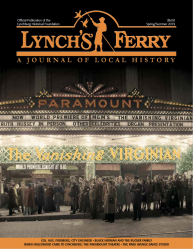 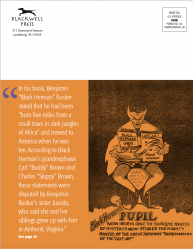 Col. Aug. Forsberg, City Engineer
S. Allen Chambers Jr.
“Even with his myriad duties” as the first city engineer, “Forsberg managed to conduct a thriving practice for private clients throughout his Lynchburg career.” Consequently, Forsberg’s footprint can still be found today in projects ranging from the Grace Street Fire Station to Holy Cross Church. In this enlightening and entertaining exploration of Forsberg’s legacy, Chambers documents both the outcries and the accolades surrounding the engineer’s numerous commissions. The author also takes advantage of “a welcome cache” of Forsberg family papers donated to the Lynchburg Museum by their descendants.

Black Herman and the Entrepreneurial Rucker Family of Main Street, Amherst
by Lynn Kable
For decades, Carl “Buddy” Brown’s recollections and questions regarding his granduncle Benjamin “Black Herman” Rucker were met with shrugs and blank stares. No one recognized the name much less recalled the dazzling career of the Amherst-born African American magician who had succeeded in mesmerizing black and white audiences alike, performing for capacity crowds from St. Louis to New York City. In this issue, Lynn Kable, in league with the Rucker-Brown family and other local researchers, puts Black Herman back in the spotlight.

When Hollywood Came to Lynchburg: Two Important Events in the Life of the Paramount Theatre
by Jeffrey S. Cole

“The Paramount Theatre closed on Thursday, August 28, 1975, after the evening’s final presentation of the rock opera Tommy, with ‘its ear-splitting’ score by The Who,” writes the author. That last impression was a far cry from the venue’s heyday, when the musical stylings of Miss Ann Melodie were featured on the Paramount’s golden pipe organ, and movie stars, athletes, and other celebrities arrived in person to celebrate the premier of The Vanishing Virginian.
The Park Avenue Dance Studio
by J. P. Vaughan Jr.

In his Spring/Summer 2009 article “Little Champions,” Vaughan recounted an “unimaginable quest” undertaken by a sandlot football team—a group of boys from Miller Park and their coach “Happy” Lee—to compete in the Pop Warner Santa Claus Bowl. Now, in this issue, the author tells the story of another impossible dream pursued by members of a Miller Park gang under the tutelage of a very different instructor.