You are here: Archives » Spring 2019 » The Park Avenue Dance Studio 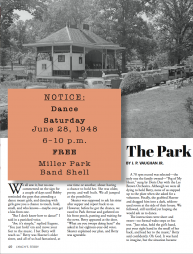 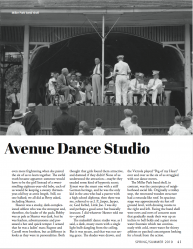 We all saw it, but no one commented on the sign for a couple of days until Bobby reminded the guys that attending a dance meant girls, and dancing with girls gave you a chance to touch, hold, smell, and who knows—maybe even get a kiss from one.

“But I don’t know how to dance!” I said in a panicked voice.

“Aw, it’s simple,” replied Eugene. “You just hold ’em and move your feet to the music. I bet Betty will teach us.” Betty was Skeeter’s older sister, and all of us had fantasized, at one time or another, about having a chance to hold her. She was older, pretty, and well built. We all jumped at the possibility.
Skeeter was supposed to ask his sister after supper and report back to us. However, before he got the chance, we raced to Park Avenue and gathered on his front porch, panting and waiting for the news. Betty appeared at the door. “What are you twerps doing here?” she asked in her eighteen-year-old voice. Skeeter explained our plan, and Betty was agreeable.
A 78 rpm record was selected—the only one the family owned—“Peg of My Heart,” sung by Doris Day with the Les Brown Orchestra. Although we were all dying to hold Betty, none of us stepped up to the plate when she asked for a volunteer. Finally, she grabbed Skeeter and dragged him into a dark, seldomused room at the side of their house. We followed, still terrified yet hoping she would ask us to dance.

^ Top
Previous page: When Hollywood Came to Lynchburg: Two Important Events in the Life of the Paramount Theatre
Next page: Fall 2019
Site Map