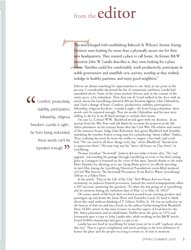 The men charged with establishing Babcock & Wilcox’s Atomic Energy Division were looking for more than a physically secure site for their new headquarters. They wanted a place to call home. As former B&W executive John W. Landis describes it, they were looking for a place where “families could live comfortably, work productively, participate in stable government and unselfish civic activity, worship as they wished, indulge in healthy pastimes, and enjoy good neighbors.”

Editors are always searching for opportunities to cut. And, at one point in the process, I considerably shortened the list of community attributes Landis had assembled above. Some of the items seemed obvious and, in the context of the entire piece, a bit redundant. Then Ann van de Graaf walked in the door with an article about the Lynchburg-educated African freedom fighter, John Chilembwe, and I had a change of heart. Comfort, productivity, stability, participation, fellowship, religious freedom—Landis is right—far from being redundant, these words can’t be repeated enough. They are words Chilembwe and his men were willing to die for in an ill-fated attempt to reclaim their home.
I’m sure Lt. Colonel W.W.  Blackford would agree with my decision.  In an excerpt from his War Years with Jeb Stuart he recounts his stopover at the Mt. Athos plantation on his journey home after the Civil War. His relative and owner of the mansion house, Judge John Roberston, first greets Blackford with hostility, mistaking the weather-beaten young man for a plundering “damn ruffian” Yankee. Then, realizing his error, he treats the soldier to supper, a hot bath, and a real bed. “No one used to all these things every day,” writes Blackford, “knows how to appreciate them.” His next stop was his “sweet old home on Clay Street” in Lynchburg.