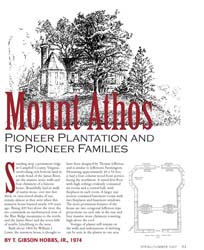 Pioneer Plantation and Its Pioneer Families
Standing atop a prominent ridge in Campbell County, Virginia, overlooking rich bottom land in a wide bend of the James River, are the massive stone walls and four chimneys of a historic home. Beautifully laid-in walls of native stone, over two feet thick, in varicolored shades of tan, remain almost as they were when this mansion house burned nearly 100 years ago. Rising 400 feet above the river, the site commands an unobstructed view of the Blue Ridge mountains to the north, and the James River and the seven hills of nearby Lynchburg to the west.

Built about 1800 by William J. Lewis, the mansion house is thought to have been designed by Thomas Jefferson and is similar to Jefferson’s Farmington. Measuring approximately 44 x 54 feet, it had a four-column wood front portico facing the northwest. A raised first floor with high ceilings evidently contained six rooms and a central hall, with fireplaces in each room. A larger rear section contained basement rooms with two fireplaces and basement windows. The most prominent features of the house are two octagonal Jefferson-type projections on each side at the rear and four massive stone chimneys towering high above the roof.

About the author: Prior to his retirement, Lynchburg native T. Gibson Hobbs, Jr. was an executive with C.B. Fleet and, earlier in his career, with the Lynchburg Foundry Company. Widely recognized as an authority on Lynchburg history, he served on the Lynch’s Ferry editorial board for many years. Hobbs was also a contributing writer and his work appeared in the first edition of the magazine in 1988.

His extensive research into Buffalo Lick Plantation and Mount Athos was formalized in 1974 in a manuscript titled “Mount Athos / Pioneer Plantation and Its Pioneer Families.” The article in this issue has been excerpted from that manuscript and edited for Lynch’s Ferry readers.

Hobbs died on October 25, 2005.  His book, The James River and Kanawha Canal, is forthcoming from Blackwell Press.