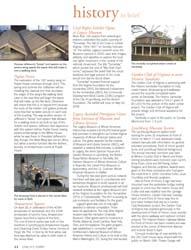 Poplar Forest
The restoration of the 100’ service wing on Poplar Forest continues through 2007. This spring and summer the craftsmen will be installing the classical trim that decorates the edges of the wing’s flat walking deck. Later in the year they will begin the layers that will make up the flat deck. Observers will notice that this is no typical trim because the ends of the hidden roof gutters protrude every few feet as water spouts on each side of the building. This was another version of Jefferson’s “terras” roof system that allowed for a walking deck to be built on top of the hidden roof system. Jefferson had experience with this system before Poplar Forest, having added similar wings to the White House while he was there. In President Jefferson’s day, though, the West Wing was not an office, but rather a service function like the kitchen, laundry, or smokehouse rooms at Poplar Forest.