You are here: Archives » Spring 2007 » War Years with Jeb Stuart 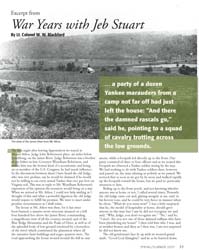 The first night after leaving Appomattox we stayed at Mount Athos, Judge John Robertson’s place, six miles below Lynchburg, on the James River. Judge Robertson was a brother of my father-in-law, Governor Wyndham Robertson, and unlike him was the hottest kind of a secessionist, and being an ex-member of the U.S. Congress, he had much influence. In the discussions between them I have heard the old Judge, who was very profane, say he would be damned if he would not be willing to eat every armed Yankee that ever put foot on Virginia soil. This was in reply to Mr. Wyndham Robertson’s expression of his opinion the secession would bring on a war. When we arrived at Mt. Athos, I could not help smiling as I thought of this and what a powerful digestion the old Judge would require to fulfill his promise. We were to meet under peculiar circumstances as I shall relate.

The house at Mt. Athos was then, for it has since been burned, a massive stone structure situated on a hill four hundred feet above the James River, commanding a magnificent view of all the country around, and of the Blue Ridge Mountains and the Peaks of Otter, as well as of the splendid body of low ground (enclosed by a horseshoe of the river) which constituted the plantation where all the extensive farm buildings and negro quarters were. The road approaching the house wound around the hill in easy ascent, while a footpath led directly up to the front. Our party consisted of three or four officers and as we neared this footpath we observed a Yankee soldier sitting by the way. We had nothing to do with Yankee soldiers then, however, and passed on, the man saluting us politely as we passed. We noticed that as soon as we got by he arose and walked rapidly up the footpath toward the house, but we paid no particular attention to him.

About the author: From June 1861-January 1863, Lt. Colonel W. W. Blackford, served in the Civil War with General Jeb Stuart, first as adjutant and later as chief engineer at headquarters. His memoirs, War Years with Jeb Stuart, were edited by Douglas Southall Freeman and published in 1945 by Charles Scribner’s Sons.

William Willis “Willie” Blackford was born 23 March 1831, the son of William Matthews Blackford and Mary Minor Blackford.  When his father—a lawyer, banker, and journalist—was appointed by President John Tyler to a diplomatic post in South America, Willie was the only Blackford child to make the journey. During this period the young man signed his letters William Wilberforce. Blackford, presumably out of respect and admiration for the British statesman and abolitionist, William Wilberforce Blackford spent part of his formative years living on Diamond Hill in Lynchburg (after returning to the U.S., his father edited the Lynchburg Virginian). He began working as a civil engineer in 1848, interrupting his career later for a year’s study at the University of Virginia. He married Mary Trigg Robertson, the daughter of former Governor Wyndham Robertson, in 1856.