You are here: Archives » Spring 2007 » Why the Babcock & Wilcox Co. Chose Lynchburg 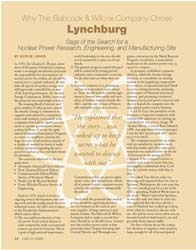 Saga of the Search for a Nuclear Power Research, Engineering, and Manufacturing Site
In 1950, Dr. Charles A. Thomas, president of Monsanto Chemical Company, made a seemingly unorthodox proposal: the responsibility for development of nuclear power for civilian use should be turned over to private industry. At that time all aspects of nuclear energy were still rigorously controlled by an arm of the federal government, the Atomic Energy Commission. Public reaction to the proposal was surprisingly positive.

The ensuing flood of interest and great number of valid queries caused the Atomic Energy Commission to organize and expand its communications with industry, particularly with companies that had no significant contracts to operate government-owned nuclear facilities. It set up the aptly named Industrial Participation Program to convey to qualified consortia the huge amount of information (much of it classified) needed for them to make realistic decisions regarding the prospects for nuclear power and their future involvement.
The consortia admitted to the program were:
•    Monsanto Chemical/Union Electric
•    Dow Chemical/Detroit Edison
•    Commonwealth Edison/Public Service of Northern Illinois
•    Pacific Gas & Electric/Bechtel
•    Foster Wheeler/Pioneer Service & Engineering

About the author: John Landis has been a leader of the worldwide effort to develop peaceful uses of nuclear energy for six decades. He helped lay the groundwork for the Eisenhower Atoms-for-Peace mission, led the Atomic Energy Commission’s first Industrial Participation Program, obtained the initial work for The Babcock & Wilcox Company’s fledgling Atomic Energy Division, and played a vital role in selection of the Mt. Athos site for anticipated nuclear activities. He was in charge of the AED’s operations in the Lynchburg area from 1955 to 1965, becoming manager of the division in 1962.

He moved on to become president of Gulf General Atomic Company. In that capacity he also served as chairman of the executive committee of Gulf United Nuclear Fuels Corporation and vice chairman of Allied-Gulf Nuclear Services. He ended his industrial career as president of Stone & Webster International Corporation. Various agencies of the federal government continued to ask him to chair important advisory boards, task forces, and committees.

His professional accomplishments as a licensed nuclear engineer resulted in his election to president of the American Nuclear Society, CEO of the American National Standards Institute, chairman of the U.S. Energy Research Advisory Board, chairman of Fusion Power Associates, president of the International Association of Macro-Engineering Societies, and a member of the U.S. National Academy of Engineering. He has received more than 30 awards, including the Henry DeWolf Smyth Nuclear Statesman Award.