You are here: Archives » Spring 2007 » Preserving The Packet Boat 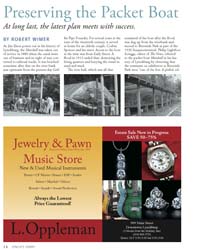 At long last, the latest plan meets with success.
As Jim Elson points out in his history of Lynchburg, the Marshall was taken out of service in 1880 when the canal went out of business and its right of way converted to railroad tracks. It was beached sometime after that on the river bank just upstream from the present-day Griffin Pipe Foundry. For several years at the turn of the twentieth century, it served as home for an elderly couple, Corbin Spencer and his sister. Access to the boat at the time was from Early Street. A flood in 1913 ended that, destroying the living quarters and burying the vessel in sand and mud.
The iron hull, which was all that remained of the boat after the flood, was dug up from the riverbank and moved to Riverside Park as part of the 1936 Sesquicentennial. Philip Lightfoot Scruggs, editor of The News, referred to the packet boat Marshall in his history of Lynchburg by observing that the remnants on exhibition at Riverside Park were “one of the few, if pitiful, relics of the canal and of The War Between the States, in Lynchburg.”

About the author: Robert Wimer retired in 2006 as editor of the editorial page of The News & Advance, a position he held since 1983. He joined The Daily  Advance in 1972 and later covered state politics and the General  Assembly for both The News and The Daily Advance from 1978 to 1980, when he became city editor of the combined newspapers. He is a  graduate of Hampden-Sydney College, where he received a B.A. degree in history and political science, and a veteran of the U.S. Army. He lives in Amherst with his wife, Betty.