You are here: Archives » Fall 2016 » Fulfilling the Dream 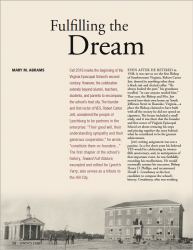 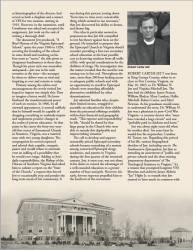 Fall 2016 marks the beginning of the Virginia Episcopal School’s second century. However, the celebration extends beyond alumni, teachers, students, and parents to encompass the school’s host city. The founder and first rector of VES, Robert Carter Jett, considered the people of Lynchburg to be partners in the enterprise: “Their good will, their understanding sympathy and their generous cooperation,” he wrote, “constitute them co-founders...” The first chapter of the school’s history, Toward Full Stature, excerpted and edited for Lynch’s Ferry, also serves as a tribute to the Hill City.
Even after he retired in 1938, it was rare to see the first Bishop of Southwestern Virginia, Robert Carter Jett, dressed in anything other than a black suit and clerical collar. “He always looked the part,” his grandsons recalled, “in case anyone needed him.” That year, the Bishop and Mrs. Jett moved into their own home on South Jefferson Street in Roanoke, Virginia—a place the Bishop claimed to have built with all the money he did not spend on cigarettes. The house included a small study, and it was there that the founder and first rector of Virginia Episcopal School set about retracing his steps and piecing together the story behind what he considered to be his greatest achievement.
Jett’s writing assignment was not a pastime. In a few short years his beloved VES would be celebrating its twenty-fifth anniversary, and, in anticipation of that important event, he was faithfully recording his recollections. He would eventually contact his successor, Bishop Henry D. Phillips, and recommend Devall L. Gwathmey as the best candidate to compose the school’s history. Gwathmey, who was working as historiographer of the diocese, had served as both a chaplain and a master at VES for two sessions, starting in 1919. However, in the meantime, until Gwathmey was asked and accepted the assignment, Jett took on the task of writing a thorough draft.
The document Jett produced, “A Brief History of the Virginia Episcopal School,” spans the years 1906 to 1920, covering the founding of the school in some detail and touching on his four years as “rector,” the title given to clergymen headmasters in those days. Though his prose style was somewhat antiquated—Jett was in his mid-seventies at the time—the messages he chose to deliver were as vital and inspiring as ever and remain so today.
Primary among the advice and encouragement the newly retired Jett hoped to impart was simply this: Dare to imagine a better world. He knew firsthand the transformational power of such an exercise. In 1906, by all outward appearances, it seemed unlikely that he himself would be capable of dropping everything to zealously inspire and implement positive changes in the realm of private education. At that point in his career the forty-one-year-old first rector of Emmanuel Church in Staunton, Virginia, was a married man with two young daughters. The congregation he served respected and adored their capable, energetic pastor and would refuse to entertain even an inkling of a possibility that he would ever resign. Adding to Jett’s daily responsibilities, the Bishop of the Diocese of Southern Virginia had asked him to submit a report on the “State of the Church,” a request that forced Jett to occasionally stop and ponder the long-term needs of his community. It was during this process, jotting down “from time to time every conceivable thing which seemed to me necessary,” that Jett discovered his ability to dream, and dream big.
One idea in particular seemed so preposterous that Jett felt compelled to test his theory against facts on the ground. He intended to propose that the Episcopal Church in Virginia should consider providing a first-rate secondary school education at the least possible cost to deserving students from all walks of life, with special consideration for the children of clergy. His investigation into the matter revealed that the need he was sensing was in fact real. Throughout the state, more than 200 boys lacking access to adequate public schools and with no opportunity to enroll in Episcopal schools were attending affordable alternatives established by other denominations.
Jett admired families who, despite their limited means, struggled to assemble an education for their children from the piecemeal offerings available within their financial and geographic reach. “This expense and responsibility,” he felt, “should be shared by that large group in the Church who were able to remedy this deplorable and impoverishing situation.”
The call to develop and support reasonably priced Episcopal secondary schools became something of a mantra among concerned Episcopal clergy, academics, and parents in Virginia during the first quarter of the twentieth century. Jett, it turns out, was not alone in his desire to extend the advantages of a well-rounded education to a greater number of boys and girls. However, his early, fervent response propelled him to the forefront of the movement.