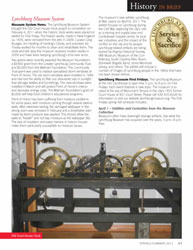 Museum System News. The Lynchburg Museum System brought the Old Court House clock project to completion on February 4, 2011 when the historic clock works were placed on exhibit for First Friday. The historic works, made in New England ca. 1835, were removed from the attic in 2009. Curator Greg Krueger, Jim Harding of Harding’s Clocks, and volunteer Ed Tinsley worked for months to clean and rehabilitate them. The clock and bell atop the museum received modern works in 2009 and have been keeping Lynchburg’s time ever since.
Two grants were recently awarded the Museum Foundation: a $7,400 grant from the Greater Lynchburg Community Trust and $2,000 from the Walmart Foundation. The Community

^ Top
Previous page: books of interest
Next page: From the Editor
Site Map