You are here: Archives » Spring 2014 » One Image Leads to Another

One Image Leads to Another 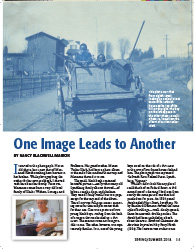 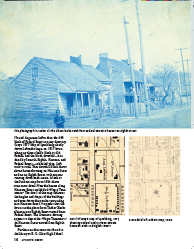 It started with a photograph. Not an old photo, but a new shot of Marianne Rhodes making ham biscuits in her kitchen. While photographing the author for her new cookbook, I chatted with her about her family. Turns out, Marianne comes from a very old local family of Clarks, Withers, Lovings, and Faulkners. Her grandmother, Marian Tucker Clark, had kept a photo album at the end of the nineteenth century, and Marianne showed it to me.
The small, black book contained beautiful pictures—really what many old Lynchburg family albums showed—of babies, couples, dogs, and chickens. They were all fairly small, four to a page, except for the very end of the album. There I saw two full-page scenes, surprising more for their subject matter than for their size.

Nancy Blackwell Marion, owner of both The Design Group and Blackwell Press, is the publisher of Lynch’s Ferry. Marion’s website lynchburghistory.com is the source and inspiration behind her “Mystery Picture of the Week” column for the News & Advance.