You are here: Archives » Fall 2006 » The Mother Church of Methodism in Lynchburg

The Mother Church of Methodism in Lynchburg 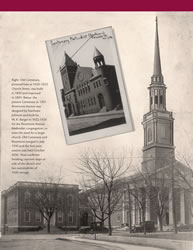 There were no churches in Lynchburg prior to 1806. However, there were a great number of saloons, especially on Water Street (now 9th Street). This was the environment in which Methodism started in Lynchburg. Samuel Mitchell lived in a home on Daniels Hill, believed built on land inherited by his wife, near the site of Point of Honor. The Mitchells started having prayer meetings in their parlor in the early 1790s. A group of worshipers met for a while, but never really grew to over five or six in number.

Lynchburg was on the Bedford circuit for Methodist preaching. A Bedford circuit rider started preaching in the area in 1798 at the old Quaker Meeting House and, on a few later occasions, may have come to Mason’s Hall, located at the corner of 3rd and Water streets (present day Church and 9th streets). It is likely that the first Methodist preaching done in the city was by Bishop Francis Asbury who rode into the city of approximately 500 inhabitants in September 1800. With him were Bishop Richard Whatcoat and William McKendree, the latter being the presiding elder of the area.

A great Methodist revival was sweeping the country; it prompted many small groups to build meetinghouses. A revival tent meeting was held in 1804 in Lynchburg at Chestnut Grove, near present day Main and 11th streets, and large crowds attended. The preacher was Lorenzo Dow, a colorful itinerant Methodist preacher who was considered eccentric by some. It was Dow who two years earlier had proclaimed Lynchburg the “seat of Satan’s Kingdom.” The tent meeting inspired fifty people to form a group of Methodists who later built the first church in Lynchburg in early 1806.


About the author: Terrell D. Moseley, graduated from Virginia Tech with a BS degree in 1955 and from the University of Illinois with a MS degree in 1957. He is a professional engineer and has written numerous technical papers. He is the co-author of The History and Ministry of Centenary United Methodist Church. For anyone desiring more in-depth information about Centenary, the eighty-two page book is available at the church office for $15. The book is also available at local city and college libraries.

^ Top
Previous page: The Dream Fulfilled: The Bicentennial of Poplar Forest
Next page: Take a Tour of Churches
Site Map