You are here: Archives » Fall 2006 » Bicentennial of Poplar Forest

The Dream Fulfilled: The Bicentennial of Poplar Forest 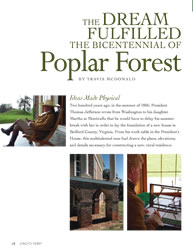 Ideas Made Physical
Two hundred years ago, in the summer of 1806, President Thomas Jefferson wrote from Washington to his daughter Martha at Monticello that he would have to delay his summer break with her in order to lay the foundation of a new house in Bedford County, Virginia. From his work table in the President’s House, this multitalented man had drawn the plans, elevations, and details necessary for constructing a new, rural residence.

However, his experienced bricklayer, Hugh Chisolm, had proved incapable of carrying out the very first step, laying the geometry of the brick foundation. The new house was not of ordinary design but a favorite shape of Jefferson’s: an octagon. For five days Jefferson was “so much engaged” on the site, beginning the fulfillment of his long-time dream to create a permanent retreat from the social hustle and bustle at Monticello, not to mention the political demands and distractions at the President’s House in Washington. At the same time, President Jefferson was busy putting his customary mark on the still unfinished President’s House by adding his signature service wings to the building. Eventually presidents would use the “West Wing” for more than just service. Jefferson’s designs for remodeling the interior of the President’s House and for the landscape were never fulfilled, but they found similar forms in both the house and the grounds of his new Bedford County retreat.


About the author: Travis McDonald has been Director of Architectural Restoration at Jefferson’s Poplar Forest since 1989.

^ Top
Previous page: A City upon a Hill: A History of the Old City Cemetery in Pictures
Next page: The Mother Church of Methodism in Lynchburg
Site Map