You are here: Archives » Fall 2006 » Orchards of Tobacco Row Mountain

Far From The Tree: The Orchards of Tobacco Row Mountain 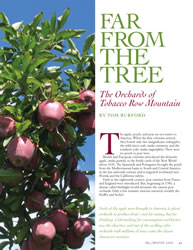 The apple, peach, and pear are not native to America. When the first colonists arrived, they found only two insignificant crabapples, the wild sweet crab, malus coronoria, and the southern crab, malus augustifolia. There were no peach or pear trees.

British and European colonists introduced the domestic apple, malus pumila, to the fertile earth of the New World about 1630. The Spaniards and Portuguese brought the peach from the Mediterranean basin to South and Central America in the late sixteenth century and it migrated northward into Florida and the California valleys.

Early in the eighteenth century, pear varieties from France and England were introduced. But, beginning in 1780, a disease called fireblight would devastate the eastern pear orchards. Only a few resistant varieties survived, notably the Kieffer and Seckel.

Every seed in every apple and peach is a new variety. To make the exact clone of an apple or peach, buds from the tree of the desired variety are grafted to a root system. Seeds of apples usually produce small astringent unpalatable fruit. Peach pits will often grow a usable fruit but not like one from the original tree.

Because fermented apple juice, called cider, was the objective of the colonists, the flavor of the fruit did not matter; so, seeds were brought from the Old World, land was cleared, and expansive cider orchards were planted. From genetic randomness—out of millions and millions of seeds and the high fertility of the soil—occasionally an apple with exceptional flavor or qualities (like long storage or large size) appeared and then was preserved by grafting. From the cider orchards and from the discard scattering of apple seeds by humans and wildlife, the domestic apple, often named for a family or locality, became established in new America. It was a natural laboratory.


Tom Burford is an orchard and nursery consultant specializing in restoration, re-creation, and design at historic sites and private estates. He is the author of Apples: A Catalog of International Varieties (1991,1998), a reference work on hundreds of apples, and has written books and manuals on grafting, orchard design, and fruit–tree culture. Burford, an Amherst County, Virginia, native, presents workshops and seminars nationally and continues to search for “lost” fruit. His life as a fruit explorer is described in Frank Browning’s book Apples (North Point Press, 1999). Articles on Burford’s work have appeared in many national publications, including US News & World Report, The American Gardener, House Beautiful, Town and Country, Southern Living, Garden Design Magazine, Kitchen Garden, Vegetarian Times and Gourmet as well as newspapers worldwide, including a feature article on the Pippin apple in the New York Times in October 2004.