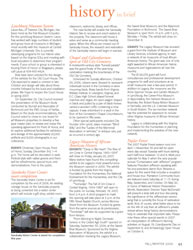 Lynchburg Museum System
Laura Rau, of Traverse City, Michigan, has been hired as the first Museum Educator for the Lynchburg Museum System. Laura has worked with large numbers of student and group tours at museums in Michigan, most recently with the museum at Central Michigan University. She is currently developing programs for our historic sites based on the Virginia SOLs and meeting with local educators to determine their program needs. If your school or group is interested in touring Point of Honor or Bragassa’s, please call Laura at 434-455-4424.

Bids have been solicited for the design of the exhibits for the Old Court House. The City expected to award a contract in late October and design will take about three months followed by the build and installation phase. We hope to reopen the Court House in spring 2007.

On September 26, City Council received the presentation of the Museum Study conducted by Stumpf and Associates of Richmond and the PRD Group of Fairfax. Based on the study recommendations, the Council voted to move to one board for all Museum properties, to develop a five year master plan, to review and revise the operating agreement for Point of Honor, and to explore additional facilities for exhibition and storage of the approximately 20,000 artifacts and 8,000 photographs in our collections.

Events Christmas Open House, Point of Honor, Sunday, December 3rd, 1–4 p.m. The home will be decorated in early Federal style with native greens and there will be refreshments, special tours. and demonstrations. Free to the public.
^ Top


Sandusky Vistor Center Nears Completion
The Sandusky Visitor Center is set for completion by the end of 2006. An existing carriage house on the Sandusky property is being converted into a visitor center which will include a gift shop, exhibit room, classroom, restrooms, library, and offices.

The new facility will enable the Sandusky Historic Site to receive and orient visitors to the property. The classroom will house a video and serve as a community meeting space. When the offices are moved out of Sandusky house, the research and restoration of the Sandusky interior will begin in earnest.
^ Top


Chapel and Columbarium Open at Old City Cemetery
A nineteenth-century style “funeral parade” was the grand finale of the year-long celebration marking the bicentenary of the Old City Cemetery.

Scheduled for Sunday afternoon, October 29, 2006, citizens were dressed to represent individuals buried in the Cemetery or wore mourning black. Brass bands from Virginia Military Institute in Lexington, Virginia, and E.C. Glass High School played funeral marches and dirges. An open wagon draped in black and pulled by a pair of black horses carried a wooden coffin containing a time capsule. It was entombed in a vault in the floor of the Cemetery’s Chapel Columbarium, to be opened in fifty years.

Other special participants included City founder John Lynch, slave musician “Blind Billy,” and the “Ladies of the Memorial Association in vehicles,” or antique cars, just as occurred a century ago.
^ Top


Legacy Museum of African American History
Exhibits “‘Deep in My Heart’: The Rise of Jim Crow in Central Virginia, 1865-1954” will close on Friday, January 26, 2007. Many visitors have found this compelling exhibit to be Legacy’s most powerful since the Museum opened in 2000. The exhibit is funded by grants from the Virginia Foundation for the Humanities, the National Endowment for the Humanities, and the City of Lynchburg.

“‘Someday’: The Fall of Jim Crow in Central Virginia, 1954-1980” will open to the public on Sunday, February 18, 2007, from 2-4 p.m. A short program to mark the opening will take place at 3 p.m. at the Fifth Street Baptist Church, across Monroe Street from the Museum. Funded by grants from the same sources as its predecessor, “’Someday’” will also be supported by a grant from Verizon.

The $106,076 grant will fund consultancies and professional development programs for staff and volunteers at six small museums over a two-year period. In addition to Legacy, the museums are the Anne Spencer House and Garden Museum in Lynchburg, the Carver-Price Museum in Appomattox, the Harrison Museum in Roanoke, the Robert Russa Moton Museum in Farmville, and the L.E. Coleman Museum in South Boston. The six-member network has the potential for expansion to include other Virginia museums of African American history.

Legacy is collaborating with the Virginia Foundation for the Humanities in planning and implementing the activities of the new network.
^ Top


Poplar Forest
The 2007 Poplar Forest season runs rom April 1–November 30 and will be open every day except Tuesday with tours starting each half-hour between 10 and 4. Mark your calendar for May 5 when the very popular annual “Conversation with Jefferson” program features President Jefferson speaking with his vice-president, Aaron Burr. Reserve a space for this event that includes a reception and house tour. Plantation Community tours are featured every Saturday at 11:15 during May, September, and October. On May 20, in honor of National Historic Preservation Month, Restoration Director Travis McDonald will present a slide talk and tour discussing the significance of the Jeffersonian service wing that is currently the focus of restoration work. And, of course, what better place to be on the 4th of July than at Jefferson’s private retreat where living history demonstrations help to celebrate that important date. Please note these other special events in 2007: an interpretation of Jefferson’s farming activities on August 18; Grandparents Day on September 8; and Archaeology Open House on October 6.