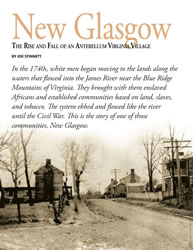 In the 1740s, white men began moving to the lands along the waters that flowed into the James River near the Blue Ridge Mountains of Virginia. They brought with them enslaved Africans and established communities based on land, slaves, and tobacco. The system ebbed and flowed like the river until the Civil War. This is the story of one of those communities, New Glasgow.

The Early Years
Now called Clifford, New Glasgow was a thriving community by the first quarter of the nineteenth century, with taverns, schools, stores, a tanyard, a hotel, distilleries, a church, and even a race track. David S. Garland, whose Brick House still stands, was a member of the U.S. Congress, and served in the state legislature for more than twenty years. Garland was also the largest slave holder in Amherst County in 1810.

By then, the community already had transformed into a significant spot on the map. William Cabell, an Englishman, established the first large white presence during the 1730s and ’40s, claiming most of the land along the James River from today’s Nelson County upstream almost to Lynchburg.

Joe Stinnett is managing editor of The News & Advance in Lynchburg. A graduate of the University of Virginia, he grew up in Clifford on a farm that was part of the original Tusculum plantation.