You are here: Archives » Fall 2008 » Growing Up in Lynchburg on Wheels with Motors

Growing Up in Lynchburg on Wheels with Motors 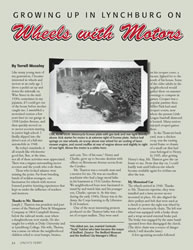 Like many young men of my generation, I became interested in wheels and motors at an early age. I drove a pedal car up and down the sidewalk on Wise Street in the mid-1930s, sometimes in my pajamas, if I could get out of the house before mother caught me. I assembled a motorized version a few years later in our garage at 1508 Linden Avenue, and then quickly moved on to motor scooters starting in junior high school. I finally slipped into the driver’s seat of a full-size automobile in 1948.

By today’s standards, it all sounds like wholesome good fun. But, at the time, not all of these activities were appreciated. There was a stigma surrounding motor scooters and the youth who rode them.

Those who looked askance were missing the point. Far from breeding bands of reckless teenagers, our fascination for wheels with motors fostered positive learning experiences that kept us under the influence of teachers and mentors.

Terrell D. Moseley graduated from Virginia Polytechnic Institute and State University with a BS degree in 1955 and from the University of Illinois with a MS degree in 1957. He is a professional engineer and has written numerous technical papers. He is the co-author of History and Ministry of Centenary United Methodist Church.
The author notes that he started thinking about writing this article while reading the book Back Then—Those Were the Days: Recollections of a Boy Growing Up During the Depression, by Dr. Donald D. Hook, who grew up at 1509 Parkland Avenue. His enthusiasm increased when he came upon two articles in the Fall/Winter, 2007, issue of Lynch’s Ferry magazine:“The History of Riverside Park”and“Hang-Out Places: Lynchburg, Virginia, in the 1940s and 1950s.” But his experiences were ultimately rekindled while discussing life on Linden Avenue in the 1940s during a chance meeting with Charlie Thaxton at Billy Craft Honda’s auto-repair waiting room in early February 2008.

^ Top
Previous page: Books about New Glasgow and Amherst County
Next page: Jen Ayres: A Remembrance of Her Life and Love of Art
Site Map