You are here: Archives » Fall 2008 » Clifford: A Historical Driving Tour of the Old Village

Clifford: A Historical Driving Tour of the Old Village 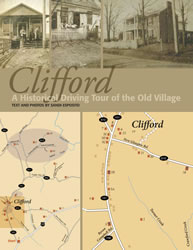 Clifford is a rural community that no longer resembles its early self: a bustling stop along the stagecoach route between Charlottesville and Lynchburg. The area was settled after the 1740s by primarily Scotch-Irish immigrants who named the settlement New Glasgow. A linear village was laid out before the Revolutionary War and soon developed into the largest urban area in Amherst County. In its heyday, the village was a center for commerce, entertainment and, for a brief period, the county government.

The naming and renaming of the village is a story unto itself. When Clifford was first incorporated in 1785, the Virginia General Assembly rejected the name of New Glasgow in favor of Cabellsburg (to honor the Cabell family who had extensive landholdings in the area). However, it continued to be locally known as New Glasgow, and in 1803 the village was again incorporated as New Glasgow. Later in the century, as rail transportation supplanted stagecoach traffic, the village post office was closed and service was moved to the New Glasgow Depot, a rail stop about two miles east of the village.

The author wishes to thank the many residents who made this article possible, including the members of the Clifford Historic District Committee—Frances Butler, Mary Brugh, Lynn Hanson, Eleanor Caldwell, Lynn Kable, Charles Hamble, Oscar Thomas, Morris and Jean Thomas, Pat Nash, Nell Kinnear, Steve and Popey Martin—and the many other wonderful people she met while researching information for the Preliminary Information Form.

One of the committee members noted above, Charles Hamble, died in late September 2008. Lt. Col. Hamble, a retired U.S. Air Force pilot who resided at Summerhill, was the president of the Amherst County Museum board. A respected local historian, he was an authority on old stage roads in the area and researched information for the Preliminary Information Form.