You are here: Archives » Fall 2008 » Books about New Glasgow and Amherst County 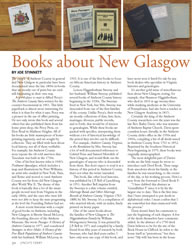 The people of Amherst County in general and New Glasgow in particular have been documented since the late 1800s in books that are mostly out of print but are each still fascinating in their own way.

A good place to start is Alfred Percy’s The Amherst County Story written for the county’s bicentennial in 1961. This little paperback is almost more interesting for what it is than for what it says. Percy was a pioneer in the use of offset printing.He not only wrote this book and several others but also published them from his home print shop, the Percy Press, on Elon Road in Madison Heights. All of his books are little masterpieces of home-printing ingenuity, and are sought by collectors. They are filled with facts about local history, not all of them verifiable. For example, his Amherst County story repeats the oft-told assertion that Tusculum was built in the 1730s.

One of his best known titles is 1949’s Piedmont Apocalypse, which includes a map and illustrations by Peter Williams, an artist who studied in New York, Paris, and Rome and moved to rural Amherst County not far from old New Glasgow after World War II.

Joe Stinnett is managing editor of The News & Advance in Lynchburg. A graduate of the University of Virginia, he grew up in Clifford on a farm that was part of the original Tusculum plantation.


^ Top
Previous page: Clifford: Full Tour with Notes
Next page: Growing Up in Lynchburg on Wheels with Motors
Site Map