You are here: Archives » Fall 2008 » Life at Tusculum During the Nineteenth Century

Life at Tusculum During the Nineteenth Century 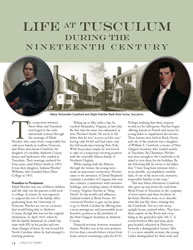 The connection between Sweet Briar and Tusculum was forged in the early nineteenth century through the marriage of Elijah Fletcher, who came from a respectable but cash-poor family in Ludlow, Vermont, and Maria Antoinette Crawford, the daughter of a wealthy Amherst County lawyer and landowner who resided at Tusculum. Their marriage endured for forty years, until Maria’s death in 1853. It was their daughter, Indiana Fletcher Williams, who founded Sweet Briar College in 1901.

Penniless to Prominent
Elijah Fletcher was one of fifteen children and the only one his parents could send to college. In return, he was expected to support the rest of the family. After graduating from the University of Vermont, Fletcher set out on a journey that would bring him to Amherst County, though this was not his original destination. In April 1810, when he left the family farmstead on a little bay mare with $50 in his pocket and two clean changes of linen, he was bound for North Carolina, where he had arranged a teaching position.

Christian Carr has worked with museums and historic houses for the past decade, including the Historic House Trust of New York City and the National Trust of Great Britain. She received her MA in Decorative Arts, Design and Culture from the Bard Graduate Center in Manhattan, and is an alumna of the Royal Oak Foundation’s Attingham Summer School, which focuses on the English country house, as well as the Victorian Summer School held in Newport, Rhode Island, and the Graduate Institute of the Museum of Early Southern Decorative Arts in Winston-Salem, North Carolina. Currently she is completing her dissertation on Sweet Briar House at Virginia Commonwealth University, and has been a member of the faculty of Sweet Briar College since 2001, where she teaches courses on museums, architecture, and the decorative arts.

The author wishes to acknowledge individuals who provided research and support for this article, writing: “I am indebted to Judy Evans-Grubbs, former professor of classics at Sweet Briar College, and now at Washington University, for disentangling the lines of our founding family, which were set forth in a privately published genealogy of 1883. Kate Chavigny in the history department and Lynn Rainville, the founding director of the Tusculum Institute, have also studied Crawford records at the Amherst County Courthouse and contributed significantly to our understanding of this rich period in the family’s history. The support and guidance of the Virginia Department of Historic Resources, directed by Kathleen Kilpatrick, SBC ’74, has been critical to the conception and realization of the Tusculum Institute.”

This article is based on a lecture Carr presented at Sweet Briar’s Homecoming Alumnae College in 2007. It has been edited for Lynch’s Ferry readers. Another version of the original presentation was published in the Winter 2007/2008 Alumnae Magazine.