You are here: Archives » Spring 2020 » XIX: The Untold Story of Womenâ€™s Suffrage in Lynchburg, Virginia

XIX: The Untold Story of Womenâ€™s Suffrage in Lynchburg, Virginia 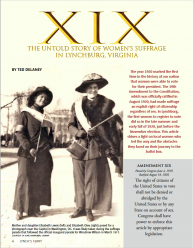 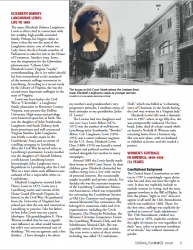 The year 1920 marked the first time in the history of our nation that women were able to vote for their president. The 19th Amendment to the Constitution, which was officially ratified in August 1920, had made suffrage an explicit right of citizenship regardless of sex. In  Lynchburg, the first women to register to vote did so in the late summer and early fall of 1920, just before the November election. This article shines a light on local women who led the way and the obstacles they faced on their journey to the ballot box.
The name Elizabeth Dabney Langhorne Lewis is often cited in connection with her wealthy, high-profile extended family. Perhaps her biggest claim to fame is that she was the aunt of the Langhorne sisters, one of whom was Lady Astor, the first female member of Parliament to take her seat in the House of Commons. Another sister, Irene, was the inspiration for the Edwardian phenomenon “Gibson Girls.” Elizabeth Lewis’s Virginia “royalty” notwithstanding, she is (or rather should be) best remembered as the matriarch of the women’s suffrage movement in Lynchburg. According to a recent study by the Library of Virginia, she was the second most important suffragist in the state of Virginia.

Lewis was born before the Civil War at “Cloverdale,” a Langhorne family plantation in Botetourt County, Virginia, near present-day Hollins University. High status and privilege were bestowed upon her at birth. She was the daughter of John Scaisbrooke Langhorne and Sarah Dabney, both from prominent and well-connected Virginia families. John Langhorne was briefly a cavalry major in the Confederate Army and co-owner of a milling company in Lynchburg. After the Civil War he served twice as Lynchburg’s postmaster. Lewis’s mother was the daughter of Chiswell Dabney, a well-known Lynchburg lawyer. Interestingly, John Langhorne was a Republican in Lynchburg after the Civil War, at a time when such affiliation was unheard of for a respectable white ex-Confederate.