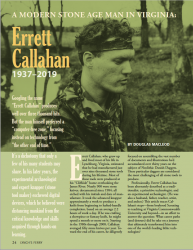 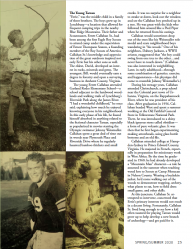 Errett Callahan, who grew up and lived most of his life in Lynchburg, Virginia, estimated that he had manufactured just over nine  thousand stone tools during his lifetime. Most of these tools were produced at his “Cliffside” home overlooking the James River. Nearly 900 were stone knives, documented since 1984, all etched with his initials and date of manufacture. It took the advanced knapper approximately a week to produce a knife from beginning to hafted-handle completion, based on an average 2.2 hours of work a day. If he was crafting a showpiece or fantasy knife, he might spend a month or more on it. Starting in the 1980s through 2008, Callahan averaged fifty stone knives per year. Toward the end of his career, he diligently focused on assembling the vast number of documents and illustrations he’d accumulated over thirty years on the subject of Neolithic Danish Daggers. These particular daggers are considered the most challenging of all stone tools to produce.
Professionally, Errett Callahan has been alternately described as a traditionalist, a primitive technologist, and an experimental archeologist. (He was also a husband, father, teacher, artist, and archer.) This article traces Callahan’s steps—from boyhood Scouting
to teaching at Virginia Commonwealth University and beyond—in an effort to answer the question: What career paths (and detours) did he take on a journey that ultimately transformed him into one of the world’s leading lithic technologists?