You are here: Archives » Spring 2020 » Ivanhoe of Campbell County 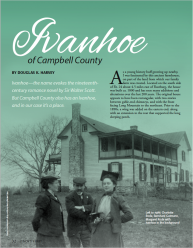 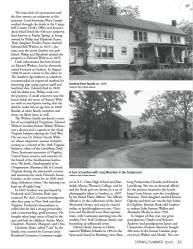 As a young history buff growing up nearby, I was fascinated by this ancient farmhouse, on part of the land from which our family farm was created. Located on the south side of Rt. 24 about 4.5 miles east of Rustburg, the house was built ca. 1800 and has seen many additions and alterations over the last 200 years. The original house appears to have been rectangular, with two stories between gable-end chimneys, and with the front facing Long Mountain to the northeast. Prior to the 1890s, a wing was added on the eastern end, along with an extension to the rear that supported the long sleeping porch.
The exact date of construction and the first owners are unknown at this juncture. Local historian Mary Gough worked through the deeds at the Campbell County Clerk’s Office and found a deed which listed the 936-acre property, then known as Poplar Spring, as being
owned by Philip and Elizabeth Payne. Their daughter Evalina Payne married Edward Ball Withers in 1819—the same year the novel Ivanhoe was published. Philip and Elizabeth deeded the property to Edward Withers in 1825.
Little information has been found on Edward Withers, but he obviously raised livestock at Ivanhoe. In August 1838 he wrote a letter to the editor in The Southern Agriculturist in which he recommended an improved method for neutering pigs using a goose quill and
lead bird shot. Edward died in 1849, and his eldest son, Philip, took over the property. A small cemetery near the house holds the stone of Nannie Withers with an inscription noting that she died by snake bite at age four in 1860. Burials of other family members and slaves are likely there as well.