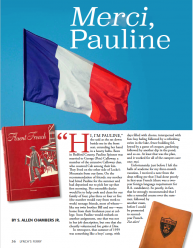 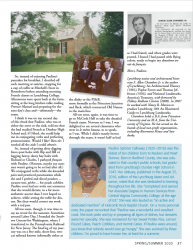 "HI, I’M PAULINE,”  she said as she sat down beside me in the front seat, extending her hand in a hearty hello. Born in Bedford County, Pauline Spinner was married to George (Pete) Calloway, a member of the extensive Calloway clan, who counted Cab among their kin.
They lived on the other side of Locke’s Mountain from our farm. On the recommendation of friends, my mother had hired Pauline for the summer and had deputized me to pick her up that first morning. Her ostensible duties would be to help cook and clean for our family of four, plus three or four or five (the number would vary from week to week) teenage friends, most of whom—like my twin brother Bill and me—were home from their freshman year at college. Soon Pauline would embark on another assignment, one that was not in her job description, but one that she cheerily volunteered for, grâce à Dieu.
In retrospect, that summer of 1959 was something like a boys’ camp, with days filled with chores, interspersed with fun: hay baling followed by a refreshing swim in the lake, fence building followed by a game of croquet, gardening followed by another dip in the pond, and so on. At least that was the plan, and it worked for all of the campers save one: moi.
Unfortunately, just before I left the halls of academe for my three-month vacation, I received a note from the dean telling me that I had done poorly in first-year French (there was a two-year foreign language requirement for B.A. candidates). So poorly, in fact, that he strongly recommended that I take a remedial course over the summer, followed by another exam, before I could be promoted to second-yea
French. Zut alors!