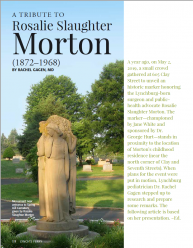 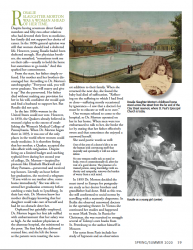 Despite having seventeen direct family members and fifty-two other relatives who had devoted their lives to medicine, her family did not support her choice of career. In the 1890s general opinion was still that women should lead a sheltered life. However, young Rosalie hadn’t been sheltered enough. Her physician brothers, she remarked, “sometimes took me on their calls—usually to hold the horse but sometimes to go inside.” And this sparked her commitment.

From the start, her father simply refused. Her mother and her brothers discouraged her. According to Dr. Morton’s autobiography: “Everyone said, you will never graduate. You will marry and give it up.” But she persevered. Her father died without making any provision for her in his will, confident she would quit and find a husband to support her. But Rosalie did not quit.

In the late 1800s women in theUnited States could not vote. However, in 1850, the Quakers already believed in women’s rights to the extent of establishing the Women’s Medical College of Pennsylvania. When Dr. Morton began there in 1893, it was one of the only places in the world where women could study medicine. It is therefore fitting that her mother, a Quaker, accepted the idea albeit with resignation. Despite living on a limited budget and catching typhoid fever during her second year of college, Dr. Morton—inspired by pioneers like Elizabeth Blackwell and Mary Putnam—persevered and received top honors. Literally an hour before her graduation, she received a telegram: “If you wish to see mother alive, come home immediately.” She was able to attend her graduation ceremony before catching a train back to Lynchburg. In their last visit, Dr. Morton knew her mother died happy knowing that her daughter could take care of herself and had let no obstacle deter her.