You are here: Archives » Spring 2012 » The National D-Day Memorial and the Dilemma of American Memory

The National D-Day Memorial and the Dilemma of American Memory 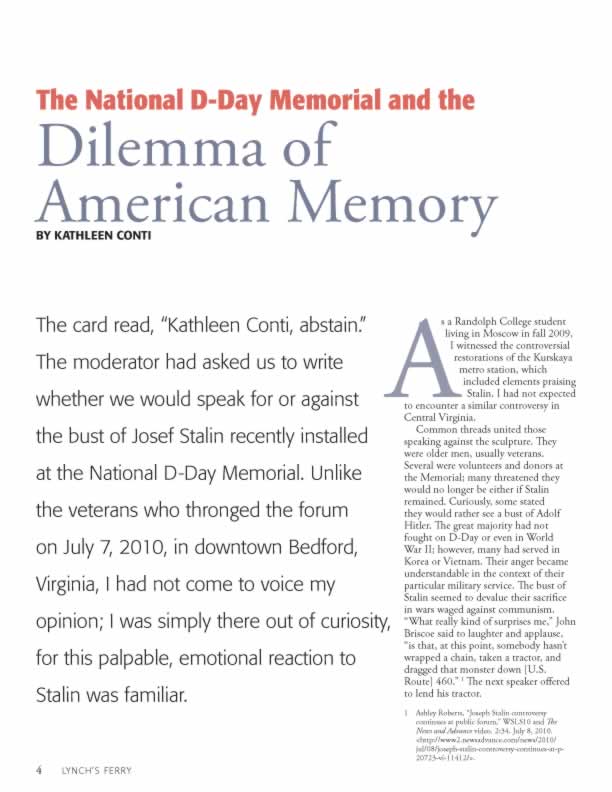 As a Randolph College student living in Moscow in fall 2009, I witnessed the controversial restorations of the Kurskaya metro station, which included elements praising Stalin. I had not expected to encounter a similar controversy in Central Virginia.
Common threads united those speaking against the sculpture. They were older men, usually veterans. Several were volunteers and donors at the Memorial; many threatened they would no longer be either if Stalin remained. Curiously, some stated they would rather see a bust of Adolf Hitler. The great majority had not fought on D-Day or even in World War II; however, many had served in Korea or Vietnam. Their anger became understandable in the context of their particular military service. The bust of Stalin seemed to devalue their sacrifice in wars waged against communism. “What really kind of surprises me,” John Briscoe said to laughter and applause, “is that, at this point, somebody hasn’t wrapped a chain, taken a tractor, and dragged that monster down [U.S. Route] 460.”

Kathleen Conti is a 2011 graduate of Randolph College, formerly Randolph-Macon Woman’s College. This article, edited for Lynch’s Ferry, was adapted from her undergraduate honors thesis. She is currently working on her masters in Russian and East European studies at UNC Chapel Hill. She was recently awarded a fellowship through Duke University to study in St. Petersburg this summer.
The author would like to express her sincere gratitude to all those who contributed their time, energy, and wisdom to this project. She especially wishes to thank her thesis advisor, John d’Entremont, with whom this project came to fruition; Marjorie Wheeler-Barclay and Ellen Hostetter, who served on the honors defense committee; Gerry Sherayko, who first introduced her to the Stalin controversy; Meg and Dave Ballard, William McIntosh, Richard Pumphrey, Robin Reed, and the staff and volunteers of the National D-Day Memorial.