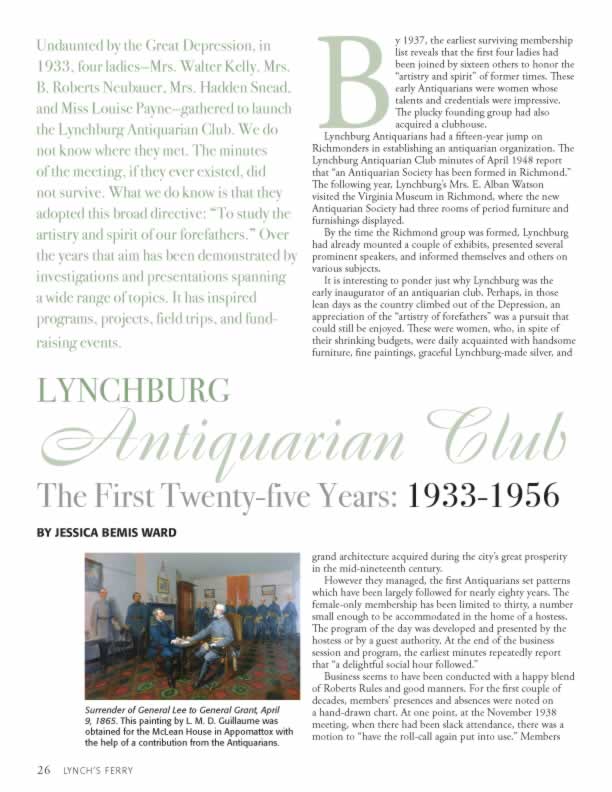 By 1937, the earliest surviving membership list reveals that the first four ladies had been joined by sixteen others to honor the “artistry and spirit” of former times. These early Antiquarians were women whose talents and credentials were impressive. The plucky founding group had also acquired a clubhouse.

By the time the Richmond group was formed, Lynchburg had already mounted a couple of exhibits, presented several prominent speakers, and informed themselves and others on various subjects.

It is interesting to ponder just why Lynchburg was the early inaugurator of an antiquarian club. Perhaps, in those lean days as the country climbed out of the Depression, an appreciation of the “artistry of forefathers” was a pursuit that could still be enjoyed. These were women, who, in spite of their shrinking budgets, were daily acquainted with handsome furniture, fine paintings, graceful Lynchburg-made silver

Jessica Ward, an Arkansan who came to Virginia to attend Sweet Briar, has lived in Lynchburg for more than thirty years. Before that, she and her husband, Peter, lived in Richmond and Washington.
She has enjoyed her membership in several local organizations, including the Antiquarian Club, and has served on several boards, including that of the Old City Cemetery. During her time there she collected recipes for her cookbook, Food To Die For. She is currently working on another cookbook to benefit the Old City Cemetery, Food To Live For, and hopes to have it out while she is still “alive and cookin’.”
Ward worked for The Bookstore for ten years until, as she describes it, “Amazon and Barnes and Noble came and we went!”