You are here: Archives » Spring 2012 » Robert G. Scott and the Riverside Mansion 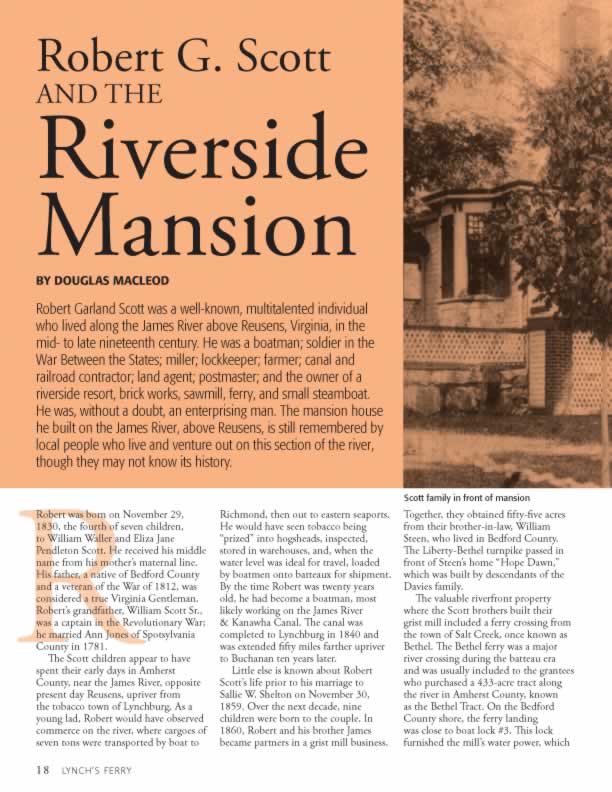 Robert was born on November 29, 1830, the fourth of seven children, to William Waller and Eliza Jane Pendleton Scott. He received his middle name from his mother’s maternal line. His father, a native of Bedford County and a veteran of the War of 1812, was considered a true Virginia Gentleman. Robert’s grandfather, William Scott Sr., was a captain in the Revolutionary War; he married Ann Jones of Spotsylvania County in 1781.

The Scott children appear to have spent their early days in Amherst County, near the James River, opposite present day Reusens, upriver from the tobacco town of Lynchburg. As a young lad, Robert would have observed commerce on the river, where cargoes of seven tons were transported by boat to Richmond, then out to eastern seaports. He would have seen tobacco being “prized” into hogsheads, inspected, stored in warehouses, and, when the water level was ideal for travel, loaded by boatmen onto batteaux for shipment. By the time Robert was twenty years old, he had become a boatman, most likely working on the James River & Kanawha Canal. The canal was completed to Lynchburg in 1840 and was extended fifty miles farther upriver to Buchanan ten years later.

Douglas MacLeod, a local history researcher and actor, has contributed to Lynch’s Ferry on the Rivermont Athletic Club football team (Fall/Winter 2004/2005), the outlaw Frank James in Lynchburg (Fall/Winter 2000/2001) and the artist Jen Ayers (Fall/Winter 2008) among others.