You are here: Archives » Spring 2017 » Memories, Fond and Painful, of Black Bottom 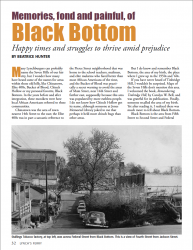 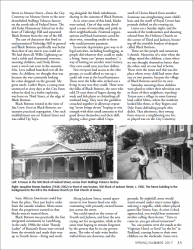 Many Lynchburgers can probably name the Seven Hills of our fair city, but I wonder how many have heard some of the names for areas within those old hills, like Chinatown, Elite 400s, Bucket of Blood, Chinch Hollow or my personal favorite, Black Bottom. In the years before and after integration, these monikers were how local African Americans referred to these communities.
Chinatown was the area of town nearest 14th Street to the east; the Elite 400s was in part a sarcastic reference to the area across Fifth Street that was home to the school teachers, mailmen, and elite mulattos who fared better than most African Americans of the time, and the Bucket of Blood was practically a secret warning to avoid the areas of Main Street, near 14th Street and farther east, supposedly because this area was populated by more ruthless people. I do not know how Chinch Hollow got its name, although someone at Jones Memorial Library joked to me that perhaps it held more chinch bugs than other areas.
But I do know and remember Black Bottom, the area of my birth, the place where I grew up in the 1950s and ’60s.
If you have never heard of Tinbridge Hill, I wouldn’t be surprised. Maps of the Seven Hills don’t mention this area. I welcomed the book, Remembering Tinbridge Hill, by Carolyn W. Bell, and was grateful for its publication. Finally, someone recalled the area of my birth. Yet after reading it, I realized there was much more to tell about Black Bottom.
Black Bottom is the area from Fifth Street to Second Street and Federal Street to Monroe Street—from the City Cemetery on Monroe Street to the now-demolished Stallings Tobacco factory on the north side of Federal Street. The old Yoder Elementary School sat in the heart of Tinbridge Hill and separated Black Bottom from the rest of the hill.
The cast of characters that lived in and patronized Tinbridge Hill in general and Black Bottom specifically was better than that of any movie you could see. We had them all. Willie Lightning carried a sickle and threatened everyone, taunting children, and Dody Brown wore a wool coat even in the summer. Mrs. Leva walked hunched over all the time. As children, we thought that was because she was constantly looking for coins dropped on the ground. My great uncle, Luther Bryce, a young man sentenced to sixty days at the City Farm where he died in a boiler explosion, was born on Third Street, at the edge of Black Bottom.
Black Bottom existed in the time of Jim Crow. Even in Black Bottom, restaurants practiced segregation. One such establishment was on Federal Street and was called Tip Top’s.
Sure, African Americans could buy from the place. They just had to order from the outside window. Silent stares from the proprietors warned us that blacks weren’t wanted there.
Black Bottom was practically the first integrated community in Lynchburg. In the early 1900s the white “Bawdy Ladies” of Buzzard’s Roost were evicted from the riverside and made their way up to Fourth Street—living and working alongside the black inhabitants, sharing in the customs of Black Bottom.
As in most areas of this kind, blacks were united. Out of that unity developed a sense of ownership and pride in their neighborhoods. Fraternal organizations and black businesses cared for their own, extending credit to those who could promise payment.
Economic deprivation gave way to illegal activities, including bootlegging, as people did whatever they could to make a living. Some ran “penny numbers,” a way of betting on another state’s lottery. One cent could earn you four dollars.
Not everyone had access to the elite groups, or could afford to run up a credit tab even at the local businesses. These were the folks who etched out a living in any way they could. These were the folks of Black Bottom, the ones who sold 25-cent shots of liquor during the week and fish plates or chitterlings all weekend long. They were the gamblers crouched together in alleyways repeating “seven brings eleven” hoping to win enough with their small amounts to feel good about themselves and their skill, playing a dice game called Craps.
Along Jackson Street, rented apartments in rowhouses lined one side, contrasting with privately-owned homes just across the street.
You could stand on the corner of Fourth and Jackson, and hear the area crying out for recognition, while at the same time hoping to remain forgotten by the powers that be in city government. The odor of stale wine bottles wafted from one doorway, and the smell of Clorox bleach from another. Someone was straightening some child’s hair, and the smell of Royal Crown hair pomade drifted on the evening air.
Listen on a Sunday night, and the sounds of the tambourines and shouting echoed from the Holiness Church on the corner of Third and Jackson, bouncing off the invisible borders of despair called Black Bottom.
These are the people and memories I cherish. Memories of a time when the village raised the children, a time when no one thought themselves better than the other, and no one had it better. These were the times and this was the place where every child had more than one or two parents, because the village of Black Bottom cared for its own.
Saturday mornings these children were glued to either their television sets or those of their neighbors, watching Tarzan save a village in some faraway land called Africa, where the residents looked like them, or Roy Rogers and Dale Evans defending people who didn’t. That afternoon, they swung from vines in a neighboring tree lot, or played war on the City Cemetery grounds. By nightfall, some would stand around under street corner lights and sing a cappella, while others played games like Simon Says. As nine o’clock approached, you would hear someone’s mother calling them home: “Time to come in, you got school tomorrow!”